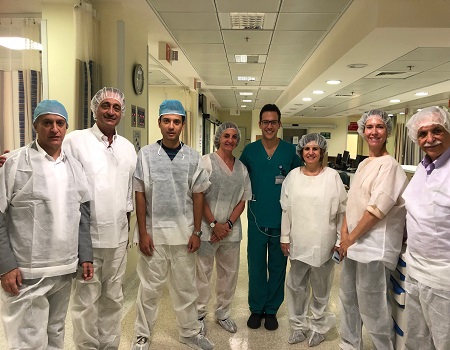 At the end of September, the Hadassah Hospital was privileged to host four important visits as the Mexican Jewish Community showed their pride in Hadassah. They were welcomed and escorted around the hospital by Jorge Diener, Associate Director for Hadassah International.

Community leadership and media:
The first visitors included members of the Central Committee and the Israelite Tribune from the Jewish Community of Mexico together with the important media outlet SDP News, and friends and donors who repeatedly expressed their support and admiration for the hospital’s work.
The central committee is the political umbrella of the Jewish Community of Mexico and was represented by its president Moises Romano and its executive director Mauricio Lulka. The Israeli Tribune is the Mexican equivalent to the American Anti-Defamation League (ADL), and was represented by Renee Dayan. They were accompanied by the media managers of the famous “Media SDP” (an Internet News Channel).
The visitors were welcomed and cordially greeted by Prof. Yoram Weiss, director of Hadassah Ein Kerem at the entrance to the Sarah Wetsman Davidson Hospital Tower. They were then escorted down to see the state-of-the-art Operating Rooms four floors below ground level.
During a visit to the new Hadassah Heart Center, which is recognized as one of the most advanced in the world, they were privileged to meet the director of Cardiology, Prof. Chaim Lotan, who showed them the facilities and the latest medical advances.
This was followed by meeting with children in the Hadassah school at the Mother and Child Pavilion where hospitalized children with cancer continue their school studies.

Dvir, a young man who survived a terrorist attack when he was 12, and has since had 36 surgeries at Hadassah, told them his remarkable personal story in the Hadassah Heritage Center.

The tour ended at the Abbell synagogue with its famous Chagall stained glass windows, where the visitors received an explanation of Chagall’s depiction of the 12 tribes of Israel.

The Mexicans expressed their admiration for the Hospital and the work that they do. Later in the week, Hadassah was happy to welcome Gabriel Saba, his wife, and three children. They had a chance to see the Saba Synagogue at the Tower as well as the Raquel Saba Pavilion where they entered the ORs and marveled at the incredible work done there. The Saba family are very generous donors to Hadassah and have a large presence in the Hospital. Gabriel thanked Hadassah for the warm reception they received and said that they will never forget their experience.

Family of a Hadassah Mexico Board member visits Hadassah for the first time.
The next day, Hadassah welcomed Elvira and Zury Asse, daughter of Rebeca and Ramon Marcos, for the first time. Rebecca is a member of the Board of Hadassah Mexico and a longtime supporter and friend of Hadassah. Elvira said that they were welcomed very nicely. They loved the explanation of Hadassah’s origins at the Heritage Center and enjoyed visiting different areas of the hospital. “It was a wonderful experience for us. It’s a wonderful project and we’re very proud to have been able to participate in it. We were very moved!”

A Mexican Medical Exchange Student comes back to visit Hadassah with her mother.
The last visit of the week to Hadassah involved Debora Memun and her daughter Irina. Irina is a doctor, and she participated in a medical exchange several years ago. Mother and daughters were highly motivated and appreciated the coexistence they saw between medical staff, nurses and patients. The Mexican young Doctor is going to marry a Russian medical graduate who is starting his residency at Hadassah and who proposed to her at a surprise event he organized at the heliport of Hadassah’s ROUND BUILDING. A real bridge for a love story at Hadassah.

Ethel Fainstein, HI Director for Mexico and Latin America stated: “We are very pleased to be able to receive our friends, our donors, and presidents from the Mexican Jewish community, journalists and experts in public health in Mexico at our hospital. It is our mission to showcase and promote the magnificent work of the Hadassah Hospital in Jerusalem, a world leader in medical research, in its mission of improving the quality of life in the world and promoting a healthy coexistence among doctors, patients and patients in a space of peace and harmony in Jerusalem “

Caption for the main picture: Central Committee and the Israelite Tribune from the Jewish Community of Mexico

The following letter of appreciation was received:

Dear Jorge and Ethel
Already back in Mexico and on behalf of the Jewish Community of Mexico, we want to thank you for all the arrangements you made so that the journalist Federico Arreola, General Director of SDP News and his wife could have the opportunity to learn about Hadassah Hospital.
The visit organized by Jorge was very interesting and undoubtedly provided him with important facts about Israeli medical advances and Hadassah’s social policy. Both were very impressed with the technology Hadassah uses and the diversity of audiences it serves.
This trip is part of the clarification work carried out by the Central Committee of the Jewish Community of Mexico (CCCJM) and Israelite Tribune to convey a positive image of Israel, the Jewish people, and our community.
We reiterate our gratitude and send you a warm greeting.