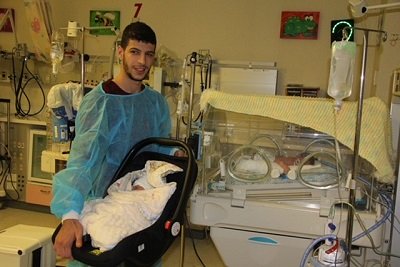 On the very same day that Tahrir, already the mother of eight children, became a grandmother, she gave birth to triplet boys–at Hadassah Hospital Ein Kerem.

“This was a pregnancy during which I was often under supervision of the doctors in the Obstetrics Department at Hadassah Hospital,” relates Tahrir, “because triplets are considered a high-risk pregnancy.” She notes too that all her other children were born at Hadassah, “so I went straight to Hadassah’s team for guidance when I learned I was carrying triplets.”

The grandchild, born at Hadassah as well, is the first child of her oldest son, Muhammed, who is studying accounting. Tahrir was in her 33rd week of pregnancy when she heard the news that her grandson was born. “I was overjoyed to hear I was a grandmother,” she says. “Then, a few hours after my daughter-in-law gave birth, I began to feel contractions, which became stronger.”

Commenting on Tahrir’s experience, Prof. David Mankuta, head of the maternity and high-risk pregnancy units at Hadassah Ein Kerem, recalls: “We delivered the beautiful babies by Caesarian section. The follow-up and treatment required special supervision by the team of obstetricians, ultrasound specialists, gynecologists, anesthesiologists, and nurses. We’re experienced at this, even if we don’t have triplets too often. The babies are good birth weights, all over five pounds, and generally healthy. They are in the intermediate neonatal unit. I was happy that all went well, and that Tahrir became a mother of 11 and a grandmother on the same day! She’s feeling good, and we all wish her Mazal Tov.”

Tahrir, a resident of Jerusalem’s Old City, relates that, at home, three sets of everything were ready. “There are three cribs, three blankets, and a lot of bottles,” she says. “And, of course, all the siblings, one of them a year and a half old, are waiting for me too.” In the meantime, she is resting from the surgery on the sixth floor of the Charlotte R. Bloomberg Mother and Child Center, with her babies nearby.

Reflecting on how she will manage with newborn triplets and eight other children, Tahrir reports that her oldest daughter, Tamara, is in Egypt at the university studying medicine, and her parents, being elderly, will not be very able to help. “Even with some of the older siblings giving a hand, I’m going to need some serious help at the beginning,” she says. “My son lives near us, so the babies will grow up together. My household was already like its own little schoolhouse, and now it will be more so.  It will be okay because I have such a great husband.”

Tahrir was 16 when she married Nasser, who was 19. Nasser says he is thrilled that Tahrir is feeling well, although tired after the birth. He is excited at the thought of bringing home three new babies and at becoming a grandfather.

“The team at Hadassah is simply wonderful,” Nasser says. “They’ve helped us at every stage. When people keep asking him how they are going to manage, he tells them, “We’re experienced with babies!”