Moving into the Future: Hadassah Dedicates New OR Complex 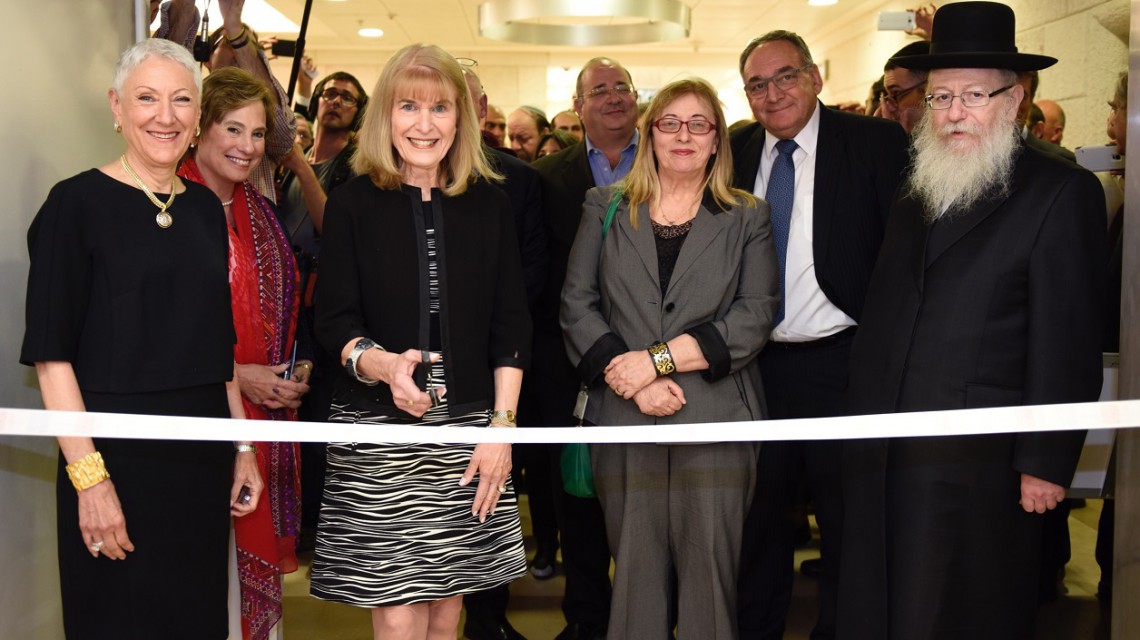 The long-awaited operating room complex for the Hadassah Medical Center’s Sarah Wetsman Davidson Hospital Tower was dedicated on January 10th. Built to allow Hadassah’s high-level surgical teams to carry out complicated surgeries under optimal conditions, with a level of  technology used by the world’s top-tier hospitals, the complex took eight years to complete at a cost of 30 million dollars. Most of the funds were contributed by Hadassah supporters in America and Hadassah International.

Jerusalem Mayor Nir Barkat: I’m sure that competent hands of the new Director General Professor Zeev Rotstein and the new National President of Hadassah Ellen Hershkin, with the help of the government, will lead Hadassah to reach new heights.”

Minister of Health Yakov Litzman, Mayor of Jerusalem Nir Barkat, National President of Hadassah Ellen Hershkin, Director General of HMO Zeev Rotstein, the CEO of the Ministry of Health Moshe Bar- Simon Tov, Jerusalem Rabbis, and other prominent persons were among those participating in the  ribbon cutting of the new  underground operating room complex at Hadassah Ein Kerem. These operating rooms will allow the surgeons at Hadassah to carry out complex operations in optimal conditions, at the level of high technology used by the world’s top-tier hospitals.

The construction project took eight years to complete, and cost $30 million dollars, donated mostly by Hadassah, the Women’s Zionist Organization of America and Hadassah-International, who were thanked.

The OR complex is located deep underground, fortified to provide a safe operating space, even in the event of chemical and biological warfare. From atypically large rooms (55-85 square meters) to stainless steel walls for a more sterile environment to special lighting affixed to the ceiling, from sophisticated computerized imaging devices to flexible operating tables that rotate to various positions, a myriad of high-tech innovations allow the surgical team a larger breadth of choices in operating.

The most unusual OR is the “hybrid room,” a breakthrough concept in which an 83-square meter room contains both a special radiology scan as well as an operating table. Dedicated for the most complex surgery–especially life-saving trauma cases—the room’s design allows for many staff members from diverse specialties to do different surgical procedures in parallel.

According to Senior Surgeon Prof. Ofer Gofrit: “When there is a complex injury, there is always debate over whether to do imaging first to determine exactly where the injury to the blood vessels is or to operate immediately. The hybrid room allows the staff to do the imaging right away, to get a CT scan, and to start surgery without moving the patient from one place to another.”

“This is the public’s hospital,” relates Incoming Director General Prof. Zeev Rotstein. With this new surgery complex comes the highest quality of technology that complements the high quality of Hadassah medicine and patient care.”

On hand with Prof. Rotstein for the dedication were Minister of Health Yakov Litzman, Mayor of Jerusalem Nir Barkat, and National President of Hadassah, the Women’s Zionist Organization of America Ellen Hershkin, along with other dignitaries.

The new generation of the Operating Rooms at Hadassah is a project of national importance, and good news for Israelis can now take advantage of such advances in medicine.

After greetings, below National President Ellen Hershkin, flanked by past Presidents Marcie Natan and Nancy Falchuk, together with Minister of Health Yakov Litzman, incoming HMO Director General Zeev Rotstein and HMO Board of Director Chair Erez Meltzer cut the ribbon. Surgery will begin in upcoming weeks.

From Ellen Herskin: “We’re talking about the most advance operating rooms in Israel and among the most advanced in the world. Our ability to complete them is a result of hard work of collecting dollar to dollar from donors like you and me for whom Israel is important. We all have one goal and that is the success of the hospitals. As a new National President, together with the government, the new Director General, the outstanding staff we will work together—kulanu b’yahach—to achieve our goals. The next stage of medical leadership and excellence requires moving the internal medicine departments to the new Tower. So many Israelis need the internal medicine services. I am happy to announce that the 330,000 women of Hadassah, associates and supporters around the world have decided  to advance the transfer of tens of millions of shekels towards moving the internal medicine departments to the. Sarah Wetsman Davidson Hospital Tower”

Said Minister Litzman: “Hadassah’s glory is returning. The recovery plan will carried out fully and this heralds a new era with a new Director General who will get off to a good start.” The Minister said that he had recently returned from abroad, where he saw many outstanding medical achievements, but he recognized how good the Israeli system is. However, in America, medical equipment is upgraded much faster than in Israel, and he promised to seek additional funds to speed up the process of acquiring equipment. He also pledged to work towards expanding medical benefits for the poorest members of society who often do not take advantage of the full range of medical services and medications because they require a more extensive plan which goes beyond the basic health care provided by the insurers.” As a Jerusalemite, I understand the importance of Hadassah to the city. I believe Hadassah will achieve greatness. The dedication of the new operating complex expresses the momentum of advancement at Hadassah and its standing at the top of Israeli medicine.”

Prof. Zeev Rotstein, Director General of HMO: “There is symbolism in the dedication of this new surgery complex. The renewed Hadassah turns to the public with openness, modesty and down-to-earth relationships. This is the public’s hospital that is open and outgoing. Together with this positive attitude goes the highest quality of medicine and technology that allow quality medical care. I have one goal: to see Hadassah reach the summit of medicine.”

Mayor Nir Barkat:  “This festive occasion doesn’t happen every day. The operating rooms are a milestone in the history of Hadassah. We look ahead to the future. Medicine and life science express the relative advantage of Jerusalem in the world and attract investments to the city and send forth important advances. I congratulate you on the opening of this complex. This is another step in strengthening Jerusalem as a medical, scientific and technological superpower. I want to personally thank all the donors and partners: I’m sure that competent hands of the new Director General Professor Zeev Rotstein and the new National President of Hadassah Ellen Hershkin, with the help of the government, will lead Hadassah to reach new heights.  In the name of all the people of Jerusalem, I thank you.”

Read President Ellen Hershkin’s message at the opening of the new OR Complex.