Nathaniel (Netanel) Felber, a Terrorist Victim, is Fighting for His Life at Hadassah. 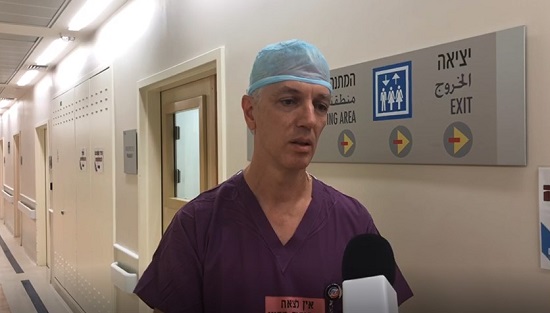 Nathaniel (Netanel) Felber, 20, who was shot by a member of an infamous terrorist clan, has undergone multiple surgeries at Hadassah Ein Kerem hospital. He is still very seriously injured – in a life-threatening condition. He was shot by terrorists near Givat Assaf, near Ramallah while guarding a bus stop.  He suffered severe gunshot wounds to his head during the attack.

He was serving in the Netzach Yehuda IDF unit for Religious Jews. His two companions were killed in the attack.

Netanel’s family moved to Israel from the United States over a decade ago. His parents Judi Abramson Felber and her husband Joe Felber, together with their extended families, have now moved to the 12th floor healing garden in the Sarah Wetsman Davidson Hospital Tower at Hadassah Ein Kerem, to be close to their very seriously wounded soldier son. Netanel has been transferred from the surgical intensive care unit to the neuro intensive care unit.

Judi Abramson Felber (See video below) stated “Please tell Hadassah supporters that we can’t thank them enough for the excellent care and loving, family-like embrace in the hospital. We appreciate the high level of medicine, and the thought that went into everything, even building a tower with healing gardens with benches for the families. I want to thank you all for your interest in these difficult times and ask you to continue praying for Netanel’s healing—Netanel Ilan Ben Sheyna Tzippora—and supporting Hadassah Hospital’s incredible staff.”

Photo above: Dr. Miklosh Bala, Head of the Trauma Department, talks to the Media about the medical treatment the victim received initially when he was brought to Hadassah Ein Karem.