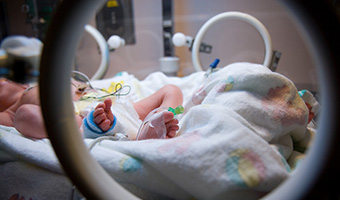 In his latest research, Dr. Volovelsky and his fellow scientists identified the reason why premature birth negatively affects kidney development and how it can be remedied during his three-year fellowship at Cincinnati Children’s Hospital Medical Center.

“For years, researchers throughout the world investigated the reasons leading to kidney failure and tried to find solutions,” said Dr. Volovelsky. “Our research identified the protein that controls kidney development and how to manipulate this protein to prevent kidney disease for those born prematurely. During pregnancy, the body first focuses on lung and brain development. Kidneys develop later on – up to week 36 of gestation – and those born prematurely have an increased chance of needing dialysis from age 50,” said Volovelsky.

Over two million people around the world suffer from chronic kidney disease and require dialysis or a kidney transplant, according to the National Kidney Foundation. The key seems to be the production of nephrons, which are microscopic blood-filtering units inside our kidneys.

Dr. Volovelsky and his team from Cincinnati identified which of the body’s proteins need to be manipulated in order to produce more nephrons and for a longer amount of time. This information will be critical in enabling drug companies to develop a way to improve kidney function in those born prematurely. The article, “Hamartin Regulates Cessation of Mouse Nephrogenesis Independently of MTor” published in the prestigious Proceedings of the National Academy of Sciences of the United States of America in May 2018, describes how erasing a specific gene in stem cells enables the creation of more nephorolic filters, improving adult kidney function.

Hadassah’s Pediatric Nephrology Unit was recently awarded a grant from the United States – Israel Binational Science Foundation to continue its research with the team in Cincinnati. This grant will enable the team at Hadassah to pursue two new research directions: what medication can successfully manipulate the protein that controls kidney development and what mechanism causes kidney problems in children born to malnourished mothers.

About the Hadassah Team

Dr. Oded Volovelsky grew up in the coastal city of Netanya. He served in an IDF Intelligence unit, “It was our job to question everything, and I apply that philosophy of questioning every angle to my current scientific research,” said Volovelsky. At age 21, Volovelsky met his wife while volunteering at a Jewish camp in Texas and followed her to Jerusalem to study at Hebrew University Hadassah Medical School.

In September 2017, Dr. Volovelsky returned to Hadassah from a three-year fellowship in pediatric nephrology at Cincinnati Children’s Hospital Medical Center. “When we were in Cincinnati, Hadassah Women adopted me and my family.”

“I came to Hadassah because of the pioneering spirit and ability to conduct outstanding research while providing quality treatment to our patients. Only at Hadassah could I work as a doctor and researcher at the same time,” said Dr. Volovelsky.

“In Cincinnati, my Arabic skills were applied to treat international patients. One day, while waiting for their child’s kidney transplant surgery, parents from Kuwait insisted on celebrating my birthday. The scene was unreal, the Kuwaiti mother was dressed in a full hijab while celebrating their Israeli doctor’s birthday – with the added presence of a translator, who happened to be Palestinian from Jerusalem. At Hadassah, these situations occur on a daily basis.”

Researcher Dr. Morris Nechama completed his PhD studies at Hebrew University first in his class. Nechama was born in Iran and escaped to Israel with his mother as a young boy. “Morris and I knew each other from our doctoral studies at the Hebrew University Hadassah Medical School and our joint work in Professor Tally Naveh-Many’s lab. Together, we established the Pediatric Nephrology Unit at Hadassah,” said Dr. Volovelsky.

Also in September 2017, Nechama returned from a seven-year fellowship at Harvard Medical School. Today, Dr. Nechama co-directs Hadassah’s Pediatric Nephrology Research Lab. “Oded sees the patients and their problems, I am tasked with figuring out the why,” he said.