New Lymphoma Drug, Thanks to Hadassah and Pennsylvania Physician/Scientists 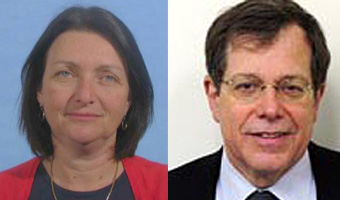 Prof. Dranitzki Elhalel, now head of Nephrology at Hadassah, explored possible applications for the fusion protein CTLA4-Fast while a research fellow in 2000 at the University of Pennsylvania laboratory of Prof. Mark L. Tykocinski, who invented CTLA4, now known as KAHR-102. Prof. Tykocinski, then head of the Department of Pathology and Laboratory Medicine at the University of Pennsylvania, is now Dean of the Jefferson Medical School, Philadelphia, PA and Provost and Executive Vice President for Academic Affairs of the Thomas Jefferson University.

When she returned to Hadassah, Prof. Dranitzki Elhalel, with Prof. Tykocinski’s encouragement, continued to study this potential drug in her own laboratory, as well as other fusion proteins of the same class. KAHR-102, she explains,”is a fusion of portions of two naturally occurring human proteins into one chimeric protein with two functional ends. These two functional ends can bring synergistic effects, leading to highly targeted death of specific cells that can bind both sides of the protein, like malignant lymphoma cells.” She adds: “Interestingly, we found out that the resulting fusion protein has a unique structure that strongly increases its potency while conserving its specificity to the malignant lymphoma cells.”

The KAHR-102 study protocol was recently approved by the Israeli regulatory authorities, clearing the way for the clinical trial to begin mid-2016. The drug company, specializing in cancer and autoimmune disease drugs, reports that its products “form a new generation of biological drugs with great diversity and superior efficacy for the treatment of multiple cancer and autoimmune diseases.”