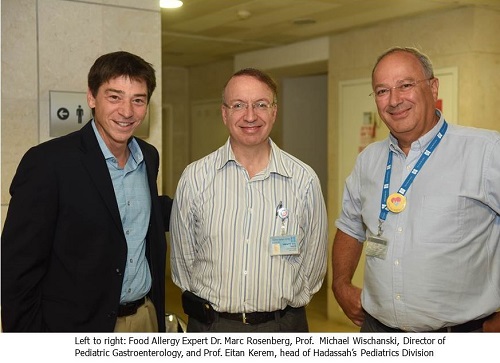 Not long ago if an Israeli child had a poor appetite, was listless, wasn’t gaining weight, and cried when eating or complained that eating hurts, a parent would have had to take him to the pediatrician who might then refer him on to a gastroenterologist, allergist and/or dietician–none of whom seemed to communicate with each other. Now, for the first time in Israel, with the launch of the Hadassah Medical Center’s Eosinophilic Gastrointestinal Disorders Clinic, there is a “one-stop” multidisciplinary center that offers everything from intake and screening to diagnosis and treatment to nutritional guidance and follow-up services.

The focus of the clinic is to help people who struggle with Eosinophilic Esophagitis (EoE), an extreme form of food sensitivity, which results in inflammation of the esophagus and often an devastating impact on a child’s development. To celebrate the Center’s official opening, Dr. Marc E. Rothenberg, the world’s foremost expert on the detection and treatment of this severe form of childhood food allergy, flew into Israel to present two talks at Hadassah Hospital-Ein Kerem.

Dr. Rothenberg, Director of the Cincinnati Center for Eosinophilic Disorders, provided an overview of eosinophilic gastrointestinal disorders, with a specific focus on EoE, a newly diagnosed food allergy disease. In explaining the severe allergy’s discovery and ramifications, Dr. Rothenberg shared a series of rarely seen medical photographs that illustrate the damage done by the condition.

Dr. Rothenberg, who runs an exchange program with Israeli physicians, estimates that more than 1,000 Israelis are walking around with EoE and have no idea what is causing their pain and difficulty with eating. Although still comparatively rare (about one in 2,500), Dr. Rothenberg explains, the chance of having the condition increases dramatically (to 2.4 percent) if there is an affected sibling, to 22 percent for fraternal twins, and to 41 percent for identical twins.

The clinic is already proving to be a much-needed asset to families across Israel, says Prof. Michael Wilschanski, Director of Pediatric Gastroenterology at Hadassah. “Before now,” he notes, “parents had nowhere to turn with this kind of severe food allergy that affects the esophagus. Now we can provide all the services they need.”

The clinic’s team of professionals–including an allergist, gastroenterologist, and dietician–communicate regularly about their patients. “We get to know these kids really well,” relates Dr. Mordechai Slae, the gastroenterologist who heads up the clinic. If the diagnostic tests reveal that EoE is not the problem, the child can still see the team’s allergist and dietician to identify and eliminate irritants from his diet. The most common “offenders,” according to Dr. Slae, “are milk, soy, fish, nuts, wheat, and eggs.”

Fraidy Schlesinger is one mom who can testify to the new center’s impact. “For so long he was throwing up, crying a lot and not really gaining as he should,” says Mrs. Schlesinger of her two-year-old son who has EoE. “Now, thanks to Dr. Slae and his team, our son is doing better than ever before. Thanks to them, we are on our way.”