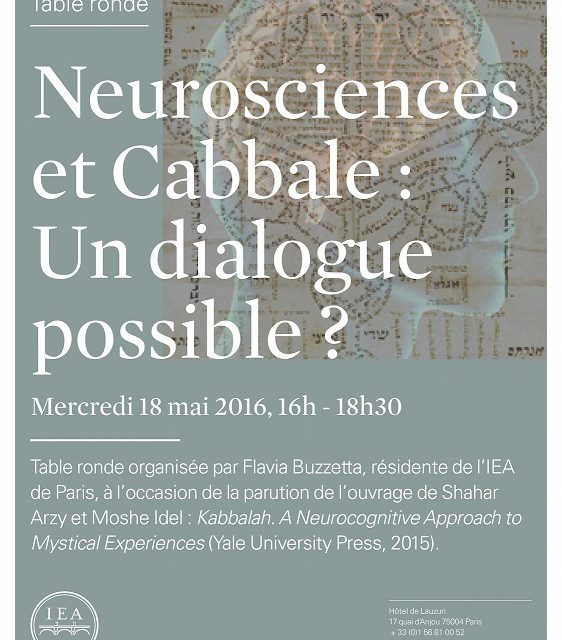 The French Institute of Advanced Studies in Paris is organising a conference for authors and neuroscientists next week (on Wednesday, the 18th of May, at the IEA, Hôtel de Lauzun, 17 quai d’Anjou, 75004 Paris). Dr Shahar Arzy, a cognitive neuroscientist and neurologist working for the Hadassah Medical Center and Moshe Idel, an eminent scholar of Jewish mysticism and thought, have published their new book Kabbalah. A Neurocognitive Approach to Mystical Experiences (Yale University Press, 2015), which will be presented and discussed during this conference, organised by Flavia Buzzetta.

In their book, the authors analyse the mystic experience of cabbalists by revealing the mechanisms and techniques their cognitive system is being subject to. For instance the state of (religious) ecstasy, which is caracterised by an alteration of neurocognitive functions which constitute the Self. This state can bring elements of depersonalisation with it, which can manifest itself in the phenomenon called autoscopy (as if someone observed himself / herself from outside their own body).

The authors explain this and the mental state of cabbalists in general by pointing out what the medical research findings in Neurology, Neuropsychology and Psychology are which underlie the neurocognitive processes during such experiences of (religious) ecstasy.

The round table during the conference is aimed at opening a dialogue on these new perspectives on phenomena apparently quite different such as brain science and religious mysticism.