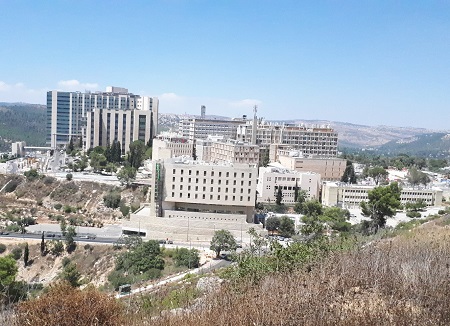 To many, the term “Middle East peace” represents the impossible dream, if not the ultimate contradiction in terms. But there is a place in the region where Jews, Muslims, and Christians meet peacefully every day on the basis of shared concerns and a sense of humanity.

It’s not a country, though it is older than many of the nations in the vicinity. Nor is it a mirage, though the desert is within view.

It’s the Hadassah Medical Center in Jerusalem. In the corridors, waiting areas, operating theaters, examination rooms, gardens and cafeterias of the center’s two hospital campuses, doctors, nurses and technicians of different faiths and ethnicities work together. Patients and visiting families reflecting the same diversity rub shoulders, speak with sympathy, and often celebrate, pray or mourn side by side.

For Hadassah, The Women’s Zionist Organization of America, Inc., which founded the medical center in 1918, equal treatment for all is an expression of Jewish ethics. But it’s not an exclusively Jewish value. “It’s an oath between me and God, that I’m going to help anyone, with no bias, not race, gender or religion, just as a human,” said Dr. Shaden Salameh, head of the emergency room at Hadassah’s Mount Scopus hospital campus—the first Arab woman to hold such a position in Israel.

Peaceful coexistence is practical as well as moral. “Israel has a lot of tension and when you present a [medical] team that has people from all walks of life it calms things down,” observed Dr. Hadar Merhav, director of the transplantation unit at the medical center’s Ein Kerem hospital campus and a Jewish native of Jerusalem. Dr. Merhav routinely works with Dr. Abed Khalaileh, director of kidney transplantation and a Palestinian native of the city. Last year NBC News reported on a liver transplant the physicians performed together involving a Jewish donor and an Arab recipient.

Though hospital staff takes working together as a given, it can still come as a surprise for patients and visitors who live their daily lives outside this cooperative atmosphere. For patient Stacey Goodstein Ashtamker, recognition came when she was sitting with her family in the hospital garden and noticed blankets with Middle Eastern designs folded and sitting on benches. “Our first thought was that they were for people feeling cold,” she said, “but only later realized they were Muslim prayer mats for those who needed them.”

Acknowledging equal dignity for all has been part of Hadassah’s ethos since the beginning, even though the institution hasn’t been spared from the Arab-Israeli conflict. During Israel’s 1948 War of Independence, terrorists ambushed a convoy on its way to the Mount Scopus hospital building, killing 78 patients and medical personnel. The building, ultimately cut off behind the Jordanian lines, sat unused for 19 years and the organization regained it only after the Six-Day War. Meanwhile, Hadassah built the newer Ein Kerem campus to continue its mission of healing, and where today all operating rooms are in an underground complex fortified to withstand conventional, biological or chemical attack.

The medical center “is like Noah’s ark, because Arabs, Jews and Christians are seen here,” said Dr. Khalaileh, the kidney specialist. “We have people coming from the Palestinian territories…  people [who] know what Hadassah is. They know they will receive medical care without borders.” Patients also come from the wider Arab world, including Jordan, Syria, Egypt and Saudi Arabia.

Israel has many other examples of Arab-Jewish friendship, collaboration, business partnerships, civic coalitions and communal programs. Through “The Branch” podcast series, the Hadassah website regularly reports on such stories and initiatives that reflect the goal of a shared society. Just as the kibbutzim made the desert bloom, these oases of peace push back the desert of misunderstanding.

No one can say when peace will reign between Israel and all its neighbors or when the notion of Middle East peace will cease to be seen as an oxymoron. But when it does come, we already have an idea what it will look like: The bustling hallways, gardens and shared spaces of the Hadassah Medical Center.

Ellen Hershkin is the national president of Hadassah, The Women’s Zionist Organization of America, Inc. HWZOA is the world’s largest women’s Zionist organization and producer of The Branch podcast, which offers a glimpse into the lives of Jews and Arabs in Israel forging meaningful relationships in a peaceful coexistence.