On the Frontline of Discovery: Hadassah Surgeons Partner With Robots 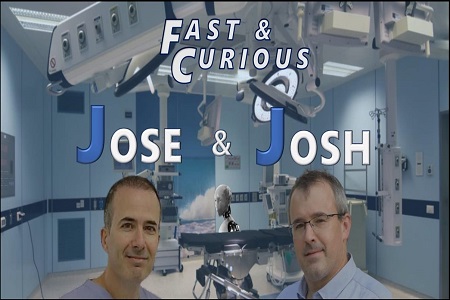 We are, of course, accustomed to seeing robots in science fiction films. Now, at the Hadassah Medical Organization, they are integral partners in the success of sophisticated surgeries.

As Prof. Jose Cohen, director of Hadassah’s Endovascular Neurosurgery Unit, explained, “Hadassah’s robots are not dolls. They are complicated machines that were built to save time, thinking, and effort and to make surgeries safer.”

Prof. Cohen described his partnership with robots during the third episode of Hadassah International’s webinar series “Fifty Shades of Health: A Journey Into the Future of Medicine.” The webinar, “Fast and Curious: Jose and Josh,” also featured Dr. Josh Schroeder, director of  Hadassah’s Spinal Deformity Unit. As he noted, “So many technologies are developing in parallel.” The challenge, he said, is to combine the existing technologies to improve the surgical outcome for patients. For example, in fixing a fracture, Dr. Schroeder and his colleagues, in a world first, used the Israeli-made Renaissance robot, designed by Mazor Robotics, in combination with the German-made Siemens Artis zeego robotic imaging system, which produces CT-like images. The Renaissance robot inserted the screws, while the Artis provided imaging in real-time.

Risky surgeries that previously required general anesthesia and long recovery can now be performed safely through minimally invasive procedures in 15 to 20 minutes under local anesthesia. The patient typically returns home within a few days, if not on the same day. As Prof. Cohen related, in the past, patients over 65 years of age were typically told they were “beyond surgery.” Today robotic procedures can be performed on even very elderly patients, like the 95-year-old woman whom Dr. Schroeder successfully treated with a spinal fusion, using only local anesthesia. She left the hospital in a few days.

Prof. Cohen and Dr. Schroeder shared stories of several other patients whose lives they transformed. There is, for example, the rabbi who had spent a year in a wheelchair with a broken back. Following a 15-minute procedure at Hadassah, he was able to walk.

There is also the older Palestinian woman from Bethlehem, who arrived at Hadassah in excruciating pain after a fall. She had been in bed for a month and a half. Her Bethlehem doctors told her that, given her age and her serious heart condition, she was not a candidate for surgery. She was brought to Hadassah, where Dr. Schroeder and his colleagues fixed the fracture. The women walked out of the hospital a few days after the procedure. “We now have an invitation to a Christmas party in Bethlehem,” Dr. Schroeder related.

Another patient, who had suffered a stroke, could neither speak nor move her right side. One day after Prof. Cohen and his team performed minimally invasive surgery, she was up on her feet, waving her hand in greeting. “I see patients in similar situations every week,” Prof. Cohen said.

Using robots, Dr. Schroeder explained, requires the surgeon to build a very specific surgical plan ahead of time, because the robot operates using the plan. “Fail to plan and plan to fail,” he said. In the future, Dr. Schroeder envisions pre-programmed plans where the surgeon will sit in the back of the room, press ‘enter,’ and the robot will perform the surgery.”

Prof. Cohen compared the precision medicine that robotics provides to the benefits of the navigation systems we use to tell us how to drive from point A to point B. Just as our navigation systems prevent us from making wrong turns, the robot reduces mistakes during surgery.

“In the next couple of years,” Prof. Cohen noted, the classic operating room will not be peopled with medical teams. The ORs will be “multi-machine rooms with only the patient inside.”

In the meantime, Hadassah has a new multi-million-dollar neuro-angiography suite, with more than $1 million in equipment donated by the American Schools and Hospitals Abroad program of US AID. “If you know of any more advanced angiography suite in the world, please let me know,” Prof. Cohen said, “because I don’t know of any.”

Prof. Cohen and Dr. Schroeder are not just saving and enhancing lives in Israel. They have patients from such countries as Syria, Iran, and Iraq, with whom Israel has no political relationship. Moreover, they are teaching physicians from all over the developing world how to perform these robotic surgeries so that they can return to their own countries and create the future of medicine for their people. “It is our moral obligation to push the boundaries of medicine forward for the world,” said Prof. Cohen.

And how will those boundaries expand? There will be even less use of the surgeon’s hands, Prof. Cohen explained. Surgical procedures will be more automated. Surgeons will sit outside of the operating room while, for example, brain aneurysms are treated. And, he related, “in the next couple of years, I will be able to remain in Jerusalem and catheterize a patient in Mexico City.”