Grateful Patients, Their Families, and Their Doctors Offer Thanks 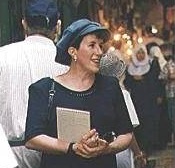 Barbara Sofer, Hadassah’s Israel Director of Public Relations, has received many warm words of appreciation from grateful patients who want to express their thanks to the hospital’s supporters around the globe.  Among them:

And, from the evacuees of the Gaza border kibbutz, Nachal Oz, who found shelter with their children at Hadassah’s Youth Village, Hadassah-Neurim, during Operation Protective Edge, Mrs. Sofer relates: “Please tell the supporters of Hadassah that they are our ‘Protective Edge.’ “   “These are just a few of those whose lives have been touched so significantly this year,” Mrs. Sofer says. “Your support through thick and thin has made all the difference.”