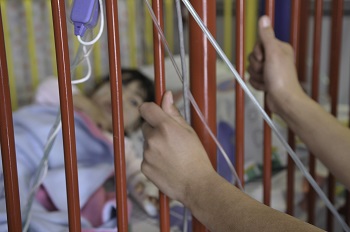 Eleven-month-old Sanad is recovering in the pediatric surgery ward of the Charlotte R. Bloomberg Mother and Child Center. His aunt, Basma is keeping a watchful eye on the curly-haired wide-eyed child.

“Basma means smile, and today I am smiling,” she said.

Sanad, who was born with a congenital liver disease, developed a huge cyst–the size of a round challah, according to his surgeon, Dr. Gidi Zamir. The cyst was compromising his growth, appetite, and kidneys.

“We see several Gazan children with liver diseases every month,” said Dr. Eyal Shteyer, one of Hadassah’s pediatric hepatologists (liver experts). We either hear directly from physicians in Gaza or are referred to from Jerusalem’s Mukassed Hospital. Sanad’s doctor in Gaza saw the growth on a CT scan and, a month ago–several days before Operation Protective Edge–his aunt brought him to Hadassah from Deir al Balah, a city of 55,000, in central Gaza.

Dr. Shteyer is a lieutenant in the Israeli reserves and deals with hospital care in the case of a terror attack. “When the rocket fell several miles from Hadassah Hospital, my patients called to see if I was okay,” he relates. “I call them in Gaza, too, to see if they are all right. Even in these hard times, I believe in the hope for peace.”

Sanad’s post-op prognosis is good, Dr. Shteyer relates. He adds: “His parents aren’t allowed to come in. I don’t know why and I don’t want to know why. I have a sick child in front of me and want to make him well. I see every Palestinian patient as my own bridge for peace.”