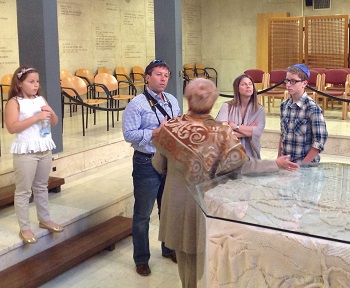 Sally and David Abadi, major donors from Panama, recently visited Hadassah Ein Kerem with their five children. The visit was organized by Jorge Diener, Director of Hadassah International Special Projects, who joined the Abadi family on the tour.

Although Sally and David have been actively involved with Hadassah in Panama for many years, (previously they were involved with Young Hadassah International), this was their first visit to Hadassah in Jerusalem, and it was of great significance for the family.  It was opportunity to get to know the hospital that they have supported so generously for many years. It was also a chance to teach their children the impact of giving and the value of Tzedakah in action.

In the Chagall Synagogue, the older children learned about each of the tribes depicted in the Chagall Windows. The family then proceeded to the Sarah Wetsman Davidson Hospital Tower to proudly see the Panama Auditorium and the Saba Synagogue donated by their close friends Alberto and Vicky Saba from Mexico.

On their way to the sixth floor of the Tower to finally see the patient room they had donated, the family was treated to a stunning view of Jerusalem from one of the Tower’s healing gardens.

Entering “their” patient room, they were delighted to see the plaque with their name and to meet the patient occupying the room. The patient’s father thanked the couple for the generosity which had allowed his son to heal in such wonderfully restorative surroundings.

The Abadi family visit ended at the Bloomberg Mother and Child Center and the state of the art Trauma Unit. They were very impressed by all that they saw and stated that “We are very thankful we have had the opportunity to be involved in such a magnificent project and to be able to pass on our values to our children”.