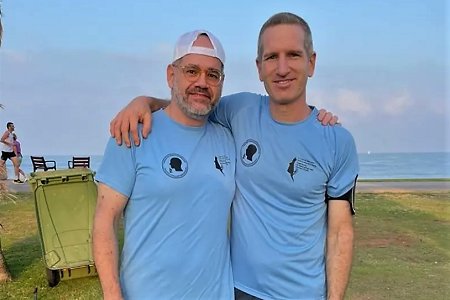 Translated and excerpted from a Hebrew article in the November 24, 2021, issue of  Walla

Often, we tend to deny medical symptoms that may indicate something is amiss with our health. We convince ourselves that everything is fine. Yossi Haddad, age 53, did just that.

One morning, Yossi noticed that he was very hoarse. At first, when the hoarseness did not go away, he attributed it to a stubborn cold. But as the hoarseness persisted, he went to see an ear, nose, and throat (ENT) physician in his community. The doctor did not find anything unusual and, “about a week later, the hoarseness disappeared,” relates Haddad.

Two months later, the hoarseness returned and, this time, it did not go away. Something felt strange, Haddad says, so he again sought medical help. The physician noticed paralysis in his vocal cords and immediately sent him for an MRI, which revealed that he had a malignant thyroid tumor that had spread to nearby lymph nodes.

Fortunately, Haddad chose to come to Hadassah Hospital Ein Kerem in time to save his life. He was treated by head and neck surgeon Dr. Nir Hirshoren. “It is true that Haddad is a young man without risk factors,” Dr. Hirshoren says, “and yet extensive testing revealed that he had a malignancy in his thyroid gland that had spread to his lymph nodes and nearby organs.”

Dr. Hirshoren explains, “Though a thyroid tumor is most common in women, it’s still diagnosed in men in about a tenth of the cases.” He adds, ”It’s usually more aggressive in men and, accordingly, requires more aggressive treatment.”

Shortly after Haddad came to see Dr. Hirshoren, he underwent an operation to remove the tumor. “Though the tumor was at a relatively advanced stage, and despite the complexity of the surgery,” Dr. Hirshoren reports, “we were able to remove the entire tumor completely and restore the functioning of the organs involved.”

Following surgery and additional  treatment, Dr. Hirshoren says, “I am more than happy to say that Haddad is free of the disease.”

Haddad considered his illness a wake-up call and, after his long recovery, he decided to change his lifestyle. He began a sports regimen that included long runs. A year later, he and Dr. Hirshoren ran a marathon together.