Hadassah SwitzerlandNews from Our Units2 October, 2015 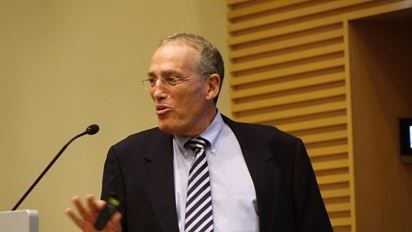 Have a look at the event entitled “Israel – zwischen Moral und Realpolitik?” (“Israel, standing between morals and practical politics?”) which took place at the community center of the Israelitische Cultusgemeinde Zurich at Lavaterstrasse 33, in 8002 Zurich, on the 30th of September (door opening at 19hs). Amongst the interested audience were his Excellency, the Ambassador representing Israel in Switzerland and the Principality of Liechtenstein, Yigal Caspi, as well as Ursula Gross-Leemann of the Swiss Liberal-Democratic Party FDP and a candidate to be a Member of the Swiss National council.

As an introduction, Senior Surgeon Professor Avi Rivkind of the Hadassah Medical Center in Jerusalem, Israel, impressed his delighted audience with his presentation on ethics in medicine (entitled “Ethical Dilemmas in Times of War”), pointing out that “as a people with a recent history of discrimination, we value EVERY human life”.

The oath of Hippocrates also stipulates “non nocere”, meaning not doing any harm, that a doctor must help his/her patient to get well.

To endorse the statement, Prof. Rivkind gave illustrative examples of how even anti-Israel terrorists, when they are injured, are brought to the Hadassah Hospitals and taken care of. They are treated there just the same as any other patient, in accordance with medical Ethics.

Pierre Heumann, a correspondent reporting from the Middle East, based in Tel Aviv, said that one needs to keep in mind that Israel is still a young nation, with a history of trauma embedded in its founders. What is more, Israel is surrounded by states of the Muslim faith and the whole region struggles to find a way to be neighbours. Israel’s politics are no worse nor better than any other state’s and quite often, people who do not live in the region, cannot really tell what the challenges of everyday life there are.

Yves Kugelmann, Editor-in-Chief of «Tachles», reminds Consumers that media coverage of Israel is diversified, it is often the reader who needs to keep in mind that heterogenous media coverage can indeed be found, depending on the articles chosen and read.

Weltwoche-Editor-in-Chief Roger Köppel pointed out that when he started 14 years ago, people had a different perception of Israel at the time, a perception which changed to the positive in the course of the years, as more information was available. He feels that discussing politics (of the Middle East) is more interesting with people who differentiate than with the so-called left-standing representatives such as Daniel Vischer or Geri Mueller.

TV-Journalist Richard C. Schneider mentioned that «the power of images» was instrumentalised by palestinian media, whereas the Israelian ethical codex prevents showing pictures like that, also with respect to the mourning families of the victims.

Subsequent to these program points, the audience had the opportunity to ask questions. Many people were benefitting from having all these Media experts within reach and had numerous questions, but Hadassah Switzerland Chairman Sacha Wigdorovits called it a day at 21.30h.