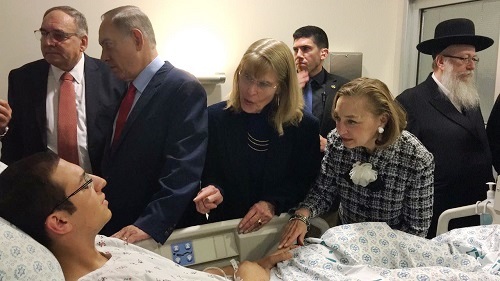 Prime Minister Benjamin Netanyahu and Health Minister Yaakov Litzman visited terror victims hospitalized at Hadassah Hospital Ein Kerem after  a terrorist rammed his flatbed truck into a group of soldiers on an IDF cultural field trip in Jerusalem. Four were killed, and 11 patients underwent treatment at Hadassah hospitals: 9 at Ein Kerem and 2 at Mount Scopus.

The Prime Minister praised the excellent medical care the soldiers were receiving, discussed increased security measures and shared his admiration for the soldiers. “Each of the soldiers I met expressed the same sentiment: They want to return to their course and complete their officers training. That spirit is the secret weapon of Israel.”

Prof. Rotstein expressed the condolences of the Hadassah family to the families of the four murdered soldiers. He pledged that the “wonderful staff of Hadassah hospitals will give the best care in the world to help the wounded soldiers get them back on their feet again.”

The first patient they visited was Dana Ofir from Rishon Lezion, 19, who suffered a pelvic fracture. She is an athlete and is training to be a sports instructor in the military. Her brother is also serving as an IDF officer.  “It’s good that I was in shape to weather this blow,” said Ofir.

Idan Levy, 20, suffered a skull fracture and a complex leg fracture. His mother told the Prime Minister that he is her only child, and that she can’t imagine how a father like the terrorist (who has four children) could kill other people’s children.

Liron Telkar, from Rishon Lezion, a second lieutenant in officer’s training, was injured in her left leg and head.  Her mother, Pnina Telkar, asked to thank the women of Hadassah for the amazing facility and the care. “I’ve never seen anything like it. You are angels of kindness,” she said.

Hadassah President Ellen Hershkin said to the parents of the injured, “All the work we do in America is to provide a facility that will ensure that your children will be okay. Otherwise, it is a building. To you we wish a full, speedy and pain-free recovery. Thank you for what you do for this country.”

President Hershkin added, “Like me, the 330,000 members, donors and supporters of Hadassah in the United States and around the world are privileged to support the lifesaving work of the Hadassah Medical Organization. In both of our hospitals at Mount Scopus and Ein Kerem, we are also on the frontlines. It is our Zionism in action.”