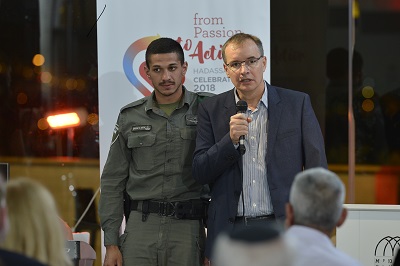 Sophie Szold, mother of Hadassah founder Henrietta, wept when she saw children with flies in their eyes on their maiden trip to pre-state Israel in 1909. Those children had trachoma, endemic in the Middle East in those days. Today, there is no trachoma in Israel, though it’s still common in the Third World. The battle against eye disease and blindness was led by the doctors and nurses in Hadassah Medical Organization’s Ophthalmology Department. Heading that department today is Prof. Itai Chowers, whose connections with Hadassah pre-date his birth.

“I was born at Hadassah Hospital and studied at Hadassah’s Medical School, but even before that my life was connected to Hadassah,” said Prof. Chowers at the award ceremony.

“My paternal grandparents made aliyah from Poland. They died young in the harsh conditions of pre-state Israel, one from tuberculosis and the other from an accident. My father, Israel, was orphaned at age 12. He found a warm home at Hadassah’s Meir Shfeya Youth Village.

“My mother, Rachel, was gravely wounded in the War of Independence in Jerusalem. Her life was saved by the doctors and nurses at Hadassah. She later worked in research in the Hadassah laboratories. My father became a professor of endocrinology at Hadassah. So Hadassah has long been part of my history. I am so appreciative.

“I want to share with you one incident of many from our work in the Ophthalmology Department today. It was a Friday night, at about 11 p.m. We had finished shabbat dinner and put away the dishes. My phone rang. A border policeman named Yarden Dowshin had just succeeded in stopping a terrorist near the Damascus Gate. His buddy, however, noticed that there was a red spot in one of Dowshin’s eyes. Together, they went to check it out at the Swartz Center for Emergency Medicine at Hadassah Hospital Ein Kerem. It turned out that the border policeman had a few pieces of shrapnel from the fire fight in his eye, and the medical resident on duty wasn’t sure how deep it was.

“I knew I had to go in to check it out myself. Something told me this was serious. I scrubbed up and we began operating to remove the foreign body. It was metal. When it’s iron, irreparable damage can be caused to the retina from the toxicity of the iron itself.

“First, we worked with a magnet to remove the metal, but it wouldn’t stick to the magnet. I actually took it out with a tweezer. That wasn’t the end. We needed to know what kind of metal it was.

“The police technicians came to their laboratory on that shabbat morning and tested the metal. At last, we had good news. It turned out to be tin, which terrorists use to make their homemade bullets. Tin doesn’t have the same toxicity as iron, so he was lucky.

“I told everything to the border policeman. All he wanted to know was when he could get back to his post defending all of us in Jerusalem. I insisted that he take a few weeks off to heal.”