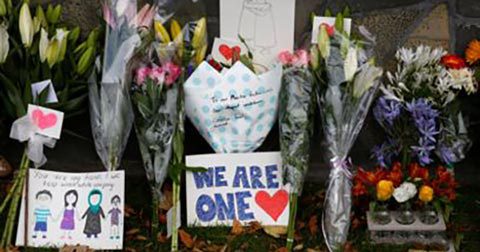 Hadassah, the Women’s Zionist Organization of America, and Hadassah International join together to condemn the devastating terror attacks against two houses of worship in New Zealand on Friday, part of which was livestreamed online after the publication of a white supremacist manifesto.

Said Ellen Hershkin, President, Hadassah, the Women’s Zionist Organization of America:
“Hadassah stands in solidarity with the Muslim community and the people of New Zealand. We join organizations around the world in condemning these ruthless acts of terror that took the lives of innocent civilians at prayer at the Al Noor and Linwood mosques.
As our hearts ache for the victims and their families, we strengthen our resolve to speak out against hate, intolerance and white supremacy. We remember how strongly the Muslim community stood with the Jewish community after the Tree of Life Synagogue attack. Now, we stand with them.”

Statement from Jennifer Leiman, President, Hadassah New Zealand:
“What happened in Christchurch in a place of worship was a terrorist attack that has shaken the heart and soul of New Zealand.
Our country changed overnight. New Zealanders basked in the sunshine of the Pacific hoping our community was immune and insulated by distance and inherent decency from the wickedness of terrorism. Our police are not armed, and we have a miniscule defense budget. We have been woken up. Automatic weapons are already banned here, but our Prime Minister immediately announced that our gun laws are to be tightened further.
Our Jewish community has reached out to support our Muslim neighbors, both financially and emotionally. We are fully aware there is no active shul in Christchurch, and that if our community were larger and more prominent, Jews may well also have been the target of this particular white supremacist. A communal email sent out by our New Zealand Federation mirrors exactly what we all feel: “An attack on any part of the New Zealand community is an attack on us all. …As a community we stand with our Muslim brothers and sisters and offer them our support and prayers. To not be able to congregate safely as a community or pray in a place of worship is something none of us thought we would see here in New Zealand. All people should feel safe to come together as a community to pray, celebrate and commemorate.””

Conversations are taking place about ways Prof. Esti Galili-Weisstub, head of the Herman Dana Division of Child and Adolescent Psychiatry at the Hadassah Medical Organization, can join Hadassah Australia in supporting NZ in mass casualty treatment. They are exploring ways that Dr. Galili may be able share her expertise in helping children overcome post-traumatic stress.

Learn more about Hadassah, the Women’s Zionist Organization of America.