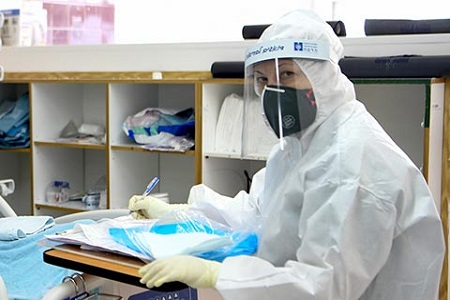 “What saved me when I was hospitalized with COVID-19 was the voice of Dr. Marc Romain, the human angel,” said Moshe Zevulun.

Indeed, the previously healthy 63-year-old and owner of a flower shop in a local mall was in mortal danger. A fever and achiness had turned into such severe breathing problems that he needed hospital care. His wife, Melly, three children, daughter-in-law, and four grandchildren also contracted the virus.

“I was admitted to Hadassah Hospital Ein Kerem because it was the only hospital still accepting COVID-19 patients,” said Moshe. “Hadassah kept opening more and more departments and never refused anyone. The whole staff was professional and dedicated, but Dr. Romain’s special voice is what saved me. He kept saying, ‘Keep going, keep going; another day or two and you’ll be over this.’ I wanted to be put on a ventilator, but he urged me to hold out, that it would be better if not.”

Dr. Romain, whose Hebrew is tinged with his native South African accent, is a 41-year-old nephrologist. His regular job is in the Medical Intensive Care Unit, but he volunteered to work also in the COVID-19 Outbreak Units. When doctors are wearing protective “astronaut suits,” their usual ability to communicate with patients is challenged, he explained. “Human contact really makes a difference in the outcome.”

Dr. Romain couldn’t light his hanukkiah (Hanukkah menorah) with his wife, Heidi, and three children on the first night of Hanukkah because he was taking care of patients in the intensive care unit until late at night. He lit a menorah with colleagues in the hospital. On this, the second night, he lit the candles at home, celebrating Hanukkah and two important anniversaries: 20 years in Israel and 10 years at Hadassah.

“I’m very proud,” Dr. Romain said, “that our medical team of men and women from around the world has been able to pull together to bring light to our patients.”