Sharing the Joy of Purim in Both Australia and Jerusalem 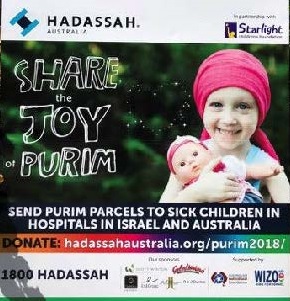 The successful 2018 Hadassah Australia fundraising campaign to send Purim Mishloach Manot (parcels) to children in Hospitals in Sydney and Melbourne as well as Hadassah in Jerusalem,  brought together several Australian partner organizations to make sure that these Purim treats would be delivered. Hadassah Australia arranged for the Hadassah Dream Doctors (Medical Clowns) to deliver Mishloach Manot treats to young patients at Hadassah – From Australia to Jerusalem with love.

The support of the Australian Multicultural Foundation was critical for this campaign, as the Foundation encouraged the Starlight Children’s Foundation Board to endorse the Purim project. Purim was viewed in the context of Australia’s varied cultural traditions and the importance of exposing the broader community to a wonderful Jewish celebration of respect and freedom.

As part of its involvement, Starlight Children’s Foundation organized fun, informal and educational activities centered on the Purim story in their hospital Starlight Express Rooms in Melbourne and Sydney. These outreach programs were run by Starlight Captains, who also educated participants on the Purim festival as a means of understanding cultural aspects of Judaism.