Six Miscarriages, A Severe Liver Disease, and a Dream 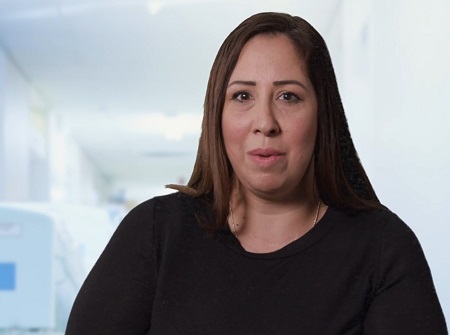 Oshrat Ochana Nagar was a busy newspaper journalist, a self-proclaimed workaholic, and a mother of two children. Shortly after the birth of her second child, however, she began to experience pain throughout her body.

A blood test revealed that her liver function was extremely abnormal, but it would take further testing to find out why. Nagar was referred to the head of the Hadassah Medical Organization’s Liver Unit, Prof. Rifaat Safadi, who determined through a biopsy that she had stage 2 primary biliary cholangitis. PBC is a chronic disease in which the bile ducts in the liver are slowly destroyed. Bile, a fluid made in the liver, aids with digestion and helps the body get rid of cholesterol, toxins, and worn-out red blood cells.

Nagar had endured five miscarriages by the time she was referred to Prof. Safadi, but she had no idea that those miscarriages were a result of this liver disease. And it did not occur to her to tell Prof. Safadi when she came in for her second appointment with him to mention that in the interim, she had gotten pregnant. Once again, she miscarried. She had very little strength to handle her daily life.

Initially, she explains, she wasn’t really dealing with her disease, despite its severity. It took her some time—and Prof. Safadi’s support—to come to terms with her chronic condition. When she told Prof. Safaadi her vision to have another child to complete her family (she had an 18-year-old and a 3-year-old), Prof. Safadi promised that he would help her through another pregnancy, high risk though it was. There was medicine she could take, Prof. Safadi explained.

This time when Nagar became pregnant, she was monitored carefully at Hadassah. Several times her liver function necessitated a hospital stay. “It’s like a family at Hadassah,” Nagar says. “When a new doctor came in to my room after looking at my chart,” relates Nagar, “he was expecting to see a very sick patient, and was surprised to see a smiling young women with makeup on.”

As Nagar recalls those hospitalizations, she notes, “Each time, Prof. Safadi was like an angel, keeping me and my baby alive.” Although the physicians tried to keep Nagar’s expectations realistic, she says, “I knew inside me that everything would be okay; that God had sent Prof. Safadi and Obstetrician Shlomo Yahalomy to keep me and my baby alive.”

Nagar managed to carry the baby to week 32, when it was safe to deliver him. After being induced, she experienced four days of labor. But, she says, “I was happy for every hour the baby was still inside because it meant there was a better chance he would be born healthy.”

Despite the four days of labor, Nagar’s actual birth experience “was magical,” she says. The baby emerged within minutes as she watched in a mirror. Baby Afik was born weighing 4.2 pounds, began to cry immediately (a good sign!), and could breathe on his own. At 35 weeks, Afik was able to go home. When asked who he looks like, Nagar laughingly reports, “I’ve been through everything, and he is a copy of his father.”

Today, Afik is a warm and independent one-year-old, who smiles a good deal. And Nagar’s liver disease? Her liver values are much much better, she reports, and she is a happy mother of three children—a mother who can take care of her family, something she could not do three years ago.