Sixth Hanukkah Candle: Jewish Heroines of Long Ago and Today 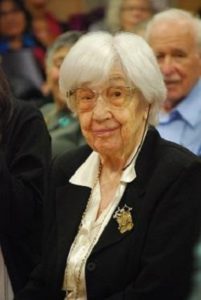 This year, the sixth night of Hanukkah coincides with the first day of the Hebrew month of Tevet.

As you may know, Rosh Hodesh (the first day of each month) is deemed to be a holiday for women, a reward bestowed on our heroic foremothers who did not take part in the sin of building the Golden Calf during the Israelites’ time in the desert after they fled Egypt.

The Maccabee women are said to have started the rebellion against the Syrian Greeks, a victory that Jews celebrate on Hanukkah. Their rebellion was the women’s protest against droit de seigneur, the alleged right of the conquerors to be with a bride before she was married. Also on Hanukkah, Jews toast Judith, the heroine who halted the siege of Jerusalem by decapitating the invading Assyrian general, Holofernes, in his own tent, with his own sword.

During this Hanukkah week, Hadassah honors its own heroine named Judith—Judith Steiner-Freud, who celebrated her 101st birthday last week. In December 1939 Judith escaped the Nazis by leaving Czechoslovakia to study at the Henrietta Szold Hadassah-Hebrew University School of Nursing. On April 13, 1948, the Hadassah Medical Organization’s convoy, which was bringing medical supplies to Hadassah Hospital on Mount Scopus, was attacked. Judith, by then a nursing school instructor, kept on teaching because, she said, “there will be a war and every nurse would be needed.”

Judith later became head of the nursing school and fought successfully for nursing to become an academic major at Hebrew University. She taught generations of nurses in Israel and abroad.

As Judith lights her candles this Hanukkah, she is thinking not only of Hanukkahs that have passed but also of those to come.