Soldier Recovers at Hadassah After Being Attacked by a Terrorist 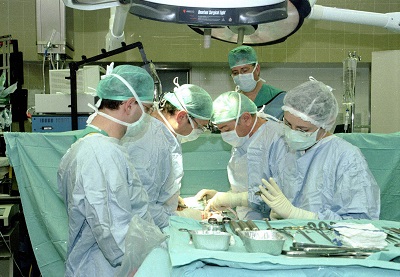 Matan was evacuated to the Swartz Center for Emergency Medicine at Hadassah Ein Kerem, and operated on twice by Hadassah’s surgeons. On the eve of Rosh Hashanah, he was visited by the head of the Central Command Major  General Roni Numa,  head of IDF manpower Hagai Topolansky, and Brigadier General Ron Kochav in the minus four Recovery Center in the Sarah Wetsman Davidson Hospital Tower.

Today he is recovering in the 6th floor Surgery Unit.

He will leave the hospital soon, to come back for follow-up treatment.

Matan’s grandmother Miriam Rynski recalled how her family had fled Poland, from a town near Krakow, to wind up in Siberia in the Holocaust. After two years in a DP camp after the war, they sailed in a livestock boat to Israel. “We know what it means to be helpless and are so proud of our soldiers. My grandson is a hero.”

Shoshana Rynski. Matan’s mother, was home, getting ready for bed on Friday night, when her phone rang. She heard the voice of Matan’s senior officer and knew something was wrong. The officer said Matan was conscious and was on his way to Hadassah Hospital. Her first thought was how she could get a taxi from Rishon Letzion on a Friday night to get to her son. She found Matan in good hands.

“I am so grateful  to the Hadassah staff,” said Shoshana, a kindergarten teacher. “I was received so warmly, and impressed by every aspect of the professional care my son received. There’s no wonder that Hadassah Hospital is the best in the world. I had to spend the Rosh Hashanah holiday in the hospital, and so much appreciated the extraordinary facilities (of the SWD Hospital Tower) The supporters of Hadassah have made all this wonderful care possibly—may you go from strength to strength. What a gift you have bestowed on me for the New Year by saving my son. Shana Tova to you all, and please come and join us in Israel. Thank you, Hadassah!”

And we say, thank you Matan, for your brave service.