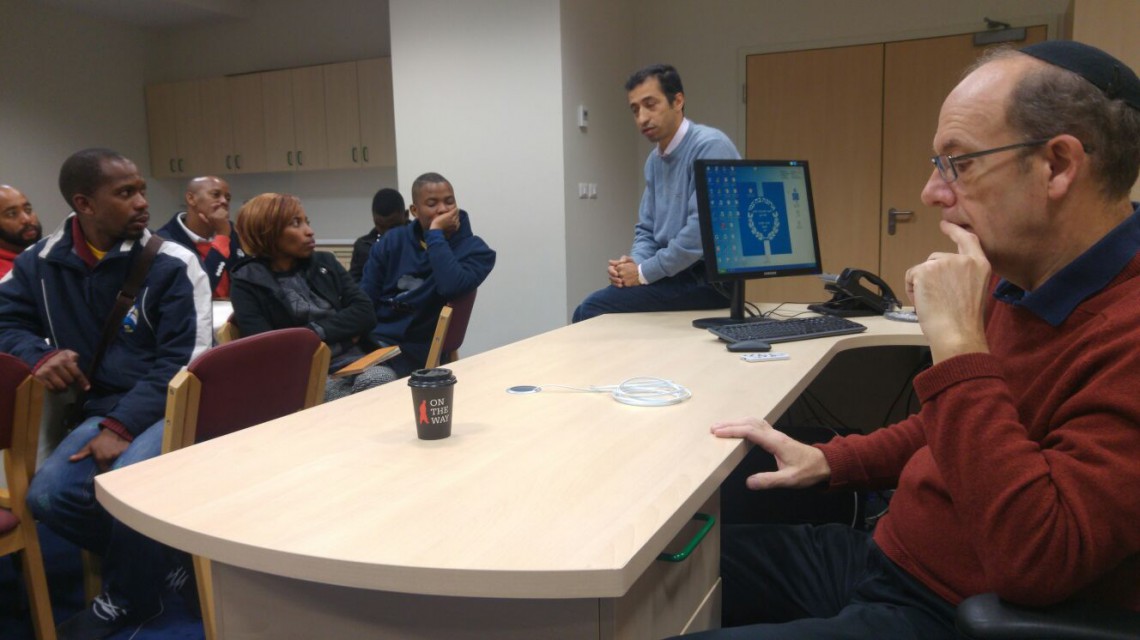 A group of young adult leaders from South Africa met with Jewish and Arab staff at Hadassah Hospital in January to better understand the successful model of interaction among Jewish and Arab staff that characterizes the hospital, particularly in treating victims of terror and the terrorists.

Both doctors have treated terrorists and terror victims. They spoke in particular about terror victim Richard Lakin, an American-Israeli teacher who had marched for civil rights with Reverend Martin Luther King before coming to Israel, where he taught Jewish and Palestinian students. Both doctors treated Mr. Lakin, who was mortally injured on October 23rd while riding on a bus in Jerusalem after a routine doctor’s appointment.

“A number of the attackers in the recent wave of violence have come from my Jerusalem neighborhood,” said Dr. Khalaileh, a Palestinian-Israeli. “Richard Lakin was stabbed and shot in the head by a Palestinian terrorist and was unable to survive the extensive injuries he sustained. I became close with his family and wanted to make a condolence call to Mr. Lakin’s wife, Karen, and his children. I was uneasy about going because I’m an Arab and thought it might make them uncomfortable. But when I walked in, Karen hugged me. Later, she wrote me that the visit restored her hope for life in Israel.”

Dr. Van-Heerden shared his journey from South Africa through Australia and explained his decision to move to Israel. “I fell in love with Israel the first time I visited,” he said. “The medicine here is very advanced and I could be part of this fantastic medical team and indulge my love of Israel. When Mr. Lakin was a patient, terrorists were sharing the same intensive care unit. Dr. Khailaileh and I often work together to save the lives of these patients.”

The South Africans also met with 26-year-old terror survivor Dvir Mosai, who was injured by a bomb when he was 13 and has undergone more than 30 operations at Hadassah Hospital since then. Mosai’s anger toward Arabs for his injury waned at Hadassah as he shared rooms with Arab patients and was treated by Arab staff. “I was seriously injured and almost lost my ability to walk, stand, and have children because of Palestinian terrorists,” he told his visitors. “I had a good reason to be angry. At Hadassah Hospital, I was treated by Arab doctors, nurses, and technicians. There is no politics in the hospital and no room for hatred.”