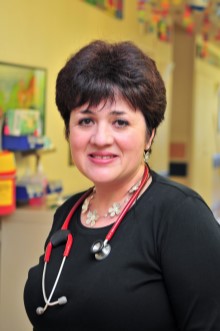 Hadassah is proud of pioneering, world-renowned Dr. Polina Stepensky, the first Israeli medical expert to be invited to present her work at the Henry Kunkel Society Meeting, held in conjunction with The Rockefeller University in New York. Director of the Hadassah Medical Center’s Department of Bone Marrow Transplantation and Immunotherapy for Adults and Children, Dr. Stepensky, in collaboration with Prof. Orly Elpeleg, head of Hadassah’s Department of Genetic and Metabolic Diseases, has identified previously unknown genetic mutations that cause various immunological deficiencies in children and threaten their lives.

The children come to her, suffering from repeated serious respiratory infections, autoimmune problems, and unhealthy blood counts. Dr. Stepensky figures out how the mutation causes the children’s immunological problems and then cures the children through bone marrow transplantation. Her success rate is over 90 percent!

Dr. Stepensky treats children from other counties, such as Russia, as well as the Palestinian Authority. Renowned in scientific circles around the globe, she was awarded prestigious European Union research grants–including one for a trilateral collaboration of Israeli, German, and Palestinian researchers to work on congenital diseases of the immune system. Dr. Stepensky has co-authored 80 articles that have appeared in professional journals, many of which present world-firsts–whether it is identifying unknown genetic mutations, describing the mechanism through which the defective cell causes particular diseases, or revealing how she cured a child with a specific genetic disease.

“I feel my patients are my own children,” she says. “We stay in touch, even though they are healthy and medication free.”

Read more about Dr. Stepensky in the June 2016 issue of Hadassah Magazine.