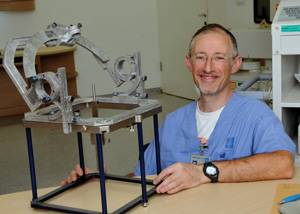 Hadassah Hospital has a new treatment for dystonia sufferers that may help reverse their painful, disfiguring and disabling disease.

By the time Talia Zusman finished high school, the tremors in her legs that had begun in 7th grade had put her in a wheelchair. “My friends were going off to the Israel Defense Forces and national service, and I was worrying about how to get upstairs,” she says. “I had an incurable disease. This was my reality. I accepted it.”

Just over a year later, in July 2008, a healthy and active Zusman turned down an invitation from Hadassah to address its national convention in Los Angeles.

“It wasn’t that I was sick anymore,” she explains, “but I couldn’t leave Israel. I was doing national service with children at risk, and they needed me. I was walking and everything by then. They showed a video of me at the convention [instead].”

And that is how thousands of Hadassah members know Zusman—through a video of an active and articulate 19-year-old with dark curls and intense gratitude to the neurosurgeon and the medical center that rid her of the symptoms of dystonia, until very recently an untreatable disorder.

“Zusman is one of 22 dystonia patients on whom we have performed deep-brain stimulation in the past six years,” says neurosurgeon Zvi Israel of the Hadassah– Hebrew University Medical Center in Jerusalem, who introduced the technique to Israel and has helped develop it. “Her affected elder brother waited to see the results of Talia’s surgery. Fourteen months later, he was in our operating room as well.”

For Zusman and her brother Ro’i, as for most of the dystonic patients operated on at Hadassah, this surgery has completely resolved their disfiguring and disabling disease. “Dystonia is a neurological disorder, a problem with the way the brain controls movement,” explains Dr. Israel. “Its victims suffer continuous muscle contractions, which cause uncontrolled twisting and repetitive movements, often with cramping and pain. In some patients, only a single muscle is affected. In others, the disease attacks groups of muscles in the arms, legs or neck, or it can affect the whole body.”

Neurologists divide dystonia into two main types: One results from birth-related or other physical trauma, infection, lack of oxygen or drug reaction. The other, which the Zusmans and most patients treated by Dr. Israel and his team have, is genetic, first appearing around age 12 and progressing until the end of adolescence.

“The fact that most of our dystonia patients have the genetic form is no coincidence,” says Dr. Israel. “Inherited or primary dystonia is, unfortunately, an Ashkenazic disease.”

The mutated gene implicated in dystonia is carried by 3 to 5 percent of Ashkenazic Jews, compared with less than 1 percent of the general population. The faulty gene, known as DYT1 and first mapped in 1989, probably results from a single mutation event in the Ashkenazic Jewish population in Lithuania about 350 years ago. It has been passed down in a dominant manner—that is, only one carrier parent need contribute the mutated gene to ensure its transmission. Each child with a carrier parent has a fifty-fifty chance of being a carrier, though not necessarily developing the disorder. Carriers can be detected prenatally.

Deep-brain stimulation, the surgery that has turned life around for dystonia patients, was, in fact, developed for people with Parkinson’s disease.

In the early 1990s, Israeli physiologist Hagai Bergman of the Hebrew University–Hadassah Medical School discovered a tiny area, deep in the brain, which is overactive in Parkinson’s sufferers. When he altered the electrical activity in this tissue, all overactivity was ameliorated.

In 2001, the United States Food and Drug Administration approved surgical implantation of electrodes into this brain area to give electrical stimuli, overriding the faulty electrical activity. Dr. Israel learned the technique during a two-year fellowship at the Oregon Health and Sciences University in Portland. He brought the technique to Israel, where he has built a deep-brain stimulation surgery program at Hadassah. He and his team operated on their first Parkinson’s patient early in 2003. “As in the United States and Europe, we obtained very good results,” he says.

As expertise in deep-brain stimulation for Parkinson’s grew worldwide, surgeons began wondering if the technique had broader applications.

“In neurological disease, an area of the brain functions abnormally—different areas, of course, in different disorders,” says Dr. Israel. “It was theorized that if areas with abnormal activity were found, that activity could be altered by deep-brain stimulation, and its effect on the disease seen.”

In dystonia, the malfunctioning area is known: It is the pallidum, a pale elliptoid region in the brain’s basal ganglia—the large masses of gray matter at the base of the cerebral hemispheres where movement is modified. Reaching and reprogramming this area takes up to eight hours in surgery, with the patient awake.

Zusman remembers lying on the operating-room table, listening to an iPod, with a stereotactic frame fitted around her head. Once her brain was scanned and the image combined with an earlier MRI to pinpoint the malfunctioning area, Dr. Israel got to work. He drilled a small hole through Zusman’s skull just above her hairline, getting the angle down to the deep brain just right to avoid damaging other brain structures. Once the channel was open, he inserted three inches of wire the thickness of a paper clip, four tiny electrodes at its end, and advanced it gently to the target.

Next came what he calls “the plumbing.” With one end of the silicon wire in place, he took the other, emerging from Zusman’s skull, placed it under her skin and trained it down the side of the head, neck and chest to her upper abdomen. There, he connected it to an electrical generator, a lightweight device the size of a small computer mouse, also implanted under the skin.

“The electrodes immediately stun the overactive cells, and the patient is often dramatically better,” says Dr. Israel. “Within a week or two, however, the cells begin recovering, and it is time to program the generator. We place a hand-held electrical device on the patient’s skin over the generator and fine-tune the electrical pulses it delivers to the brain. Initially, we give only a small amount of stimulation, which must sometimes be increased.”

For patients who come from outside Jerusalem, Dr. Israel has something extra. “I live in northern Israel,” explains Ro’i Zusman. “It is inconvenient to come to Jerusalem to have my generator adjusted, and it is hard on my wife and baby. So Dr. Israel gave me a remote-control device—a box about the size of a largish mobile phone—which he has programmed so that I can change stimulation parameters myself.”

While results are best when deep-brain stimulation is performed before the disease permanently contracts muscle, Ro’i Zusman is not the only patient to delay treatment. “This is brain surgery, and patients are understandably cautious,” says Dr. Israel.

One 20-year-old woman negotiated with Dr. Israel for three years before finally coming to a decision. “She is from an ultra-Orthodox family, one of three affected children in a family of ten,” he explains. “She is terrified of all things medical—but her disease had become disabling. She could not walk unsupported and rarely left the house. She finally decided that life was not worth living the way she was.”

Within two weeks of surgery, the young woman was walking independently. She now walks four to five hours each day, and her two affected siblings are considering following her into Dr. Israel’s operating room.

Another of his patients is a woman in her forties, once so disabled she got around on an electric bed on wheels, operated with a joystick. Mother of a 4-year-old daughter, she was planning to have another child and wanted to be well to raise her.

Dr. Israel recalls a Russian immigrant who as a child had gone to Britain for treatment for his dystonia and then came to Hadassah. “All those years ago, he had had electrodes implanted into his cerebellum, which had not helped him and were still there,” says Dr. Israel. “We had to operate to remove them before he could do the MRI. He had surgery a month ago and is beginning to see the benefit.”

Three other Israeli hospitals have followed Hadassah and now perform the surgery. Its $26,000-cost per patient (compared with about $100,000 in the United States) has been covered by Israel’s health insurers since 2005, after Hadassah subsidized the first 20 patients operated on during 2003 and 2004. “Hadassah in the United States and Israel can take pride in pioneering deep-brain stimulation in Israel, medically and financially,” says Dr. Israel.

Deep-brain stimulation patients are, he says, “among the most grateful on the planet. In the 10 years that the procedure has been performed worldwide…the stimulation usually results in a complete reversal of symptoms and the disease doesn’t seem to progress.”

This is unlike in Parkinson’s patients, where the technique alleviates suffering, but doesn’t cure. With Parkinson’s, “the best we can do is reverse symptoms, effectively turning back the clock 5 or 10 years,” says Dr. Israel.

People are looking to stem cell therapy as the next major advance in treating Parkinson’s. “But as it is likely to be a long time before stem cells are developed into a useful and effective treatment,” he notes, “deep-brain stimulation helps many patients in the interim.”

At Hadassah, two improvements to the technique for Parkinson’s are now being perfected, according to Dr. Israel. “One is the development of tools to use in the OR in real time that tell us not only that we’re inserting the electrodes in the right area of the brain, but that we’re inserting them in the hot spot of that tiny area. This hot spot is a microscopic strip of cells that fire at a certain frequency, a hallmark of Parkinson’s. The longer the strip, the better the surgical outcome. We’re the first in the world to describe this correlation.”

The second important refinement is the degree of stimulation delivered to the malfunctioning brain area. Brain activity varies, says Dr. Israel. For example, it drops when a patient sleeps and rises when he or she goes running. If activity in the brain’s cortex can be recorded, it can be used to indicate how much stimulation should be given at different times and provide precisely the right amount, making implanted electrodes more effective.

“Until the biologists can say: ‘Here are the stem cells!’ we believe deep-brain stimulation has a long way to go and much help to give patients with a range of difficult neurological disorders,” says Dr. Israel.