Stories from Nepal: A Hadassah Pediatrician Recalls his Inspiring Experience 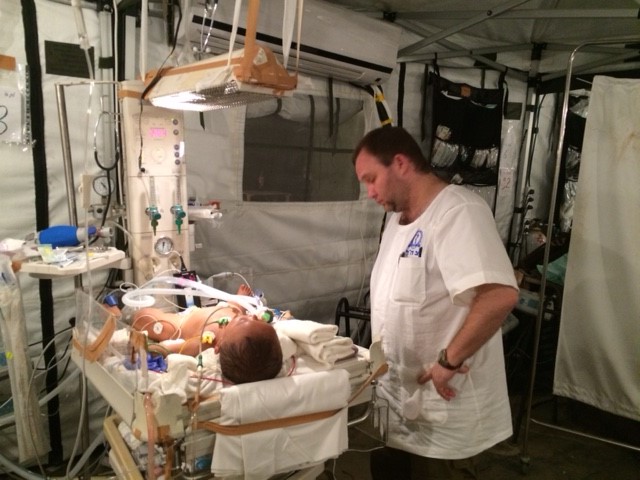 Dr. Uri Ilan, Chief Resident of the Department of Pediatrics at Hadassah Hospital-Ein Kerem, still derives inspiration and spiritual sustenance from his experience as a member of the Israeli rescue mission to Nepal in the wake of its earthquake. Many patients still command a vivid place in his memory, but here are stories of just one young girl and a five-month-old baby.

Two Israeli doctors found a 12-year-old girl in her local village who had suffered major head trauma. They brought her to the Israeli field hospital for treatment.

The girl turned out to have major bleeding in her head that required neurosurgery. The surgery went wonderfully. During her post-op hospitalization, the girl was treated by an Israeli volunteer physiotherapist who happened to be trekking in Nepal, heard about the field hospital, and came to help.

After two weeks, the girl was able to stand and walk—a powerful and significant success, particularly for a girl that lives in a village with no medical support.

It wasn’t only trauma caused by the earthquake that brought patients to the Israeli field hospital. A Nepalese baby was brought to the medical team because she had seizures, severe anemia, and kidney malfunction. The field hospital physicians diagnosed hemolytic-uremic syndrome, a rare disease where the kidneys stop working and the patient produces no urine. Even with treatment in a pediatric intensive care unit, there is only an 80 percent survival rate.

Following a late-night meeting, agonizing over the limited resources they had available to treat the baby, they decided they could not give up and would do whatever possible. After consultation with doctors back home in Israel, they decided to perform a peritoneal dialysis. Before they could begin, however, they had to send a soldier to search for a special catheter they needed to do the procedure. After a day of searching, he located one. The surgery was carried out and, after two days in the field hospital, the team transferred the baby to a local hospital, where they had more resources and intensive care beds.

Although, sadly, the baby died despite their extensive efforts, Dr. Ilan relates, “at least we demonstrated to the people that for we Israeli doctors, there is no case where we give up.”

He adds: “Life is important and we will fight for everyone–even when we think there is no chance to save the patient.”