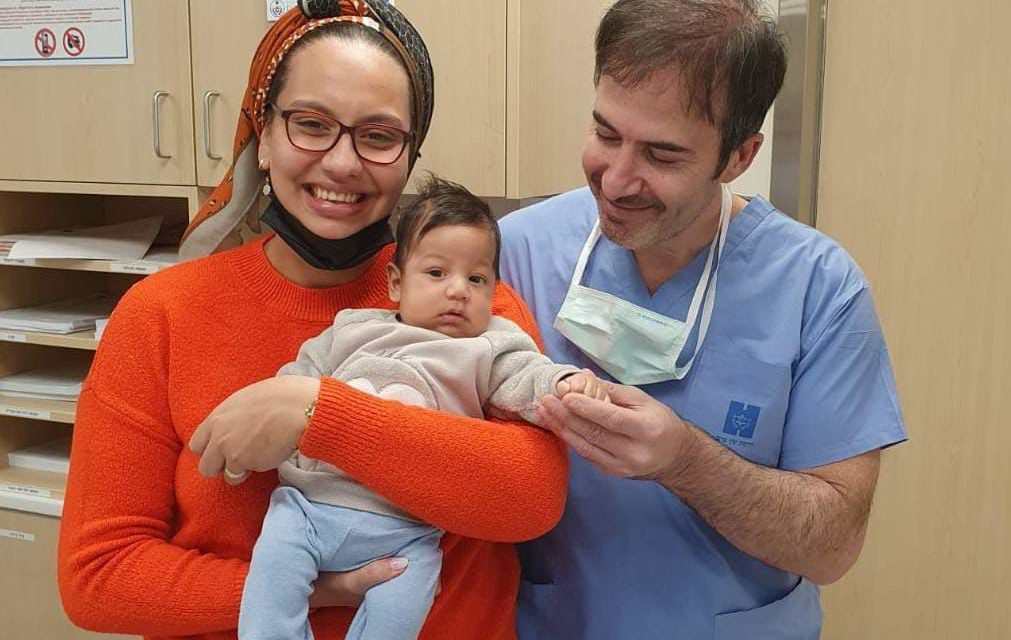 After suffering a stroke at age 29, Jennifer Lopez, an Israeli immigrant from Ecuador, was told by many physicians that becoming pregnant again would threaten her life. She and her Israeli husband already had a daughter, but they wanted another child.

Recalling the onset of her stroke two years ago, Jennifer relates, “I was at work when I started to feel bad. I took my phone to answer the messages, and my phone fell out of my hand. I picked it up, and it fell again. The third time I realized that something strange was going on. I thought that, perhaps, I had had a stroke, but I convinced myself that there was no way. I’m young! When I stood up from the chair at work, I felt that my left leg had fallen asleep, and I dragged it. I picked up the phone to call my mother, who is a nurse, and I told her what had happened. She told me to get it checked out immediately.”

After going to an emergency clinic, Jennifer was rushed to Hadassah Hospital Ein Kerem, where Prof. Cohen was waiting for her. She learned that she did, indeed, have a stroke, and that she was at the beginning of a pregnancy that was progressing outside of her womb.

“Prof. Cohen immediately performed a catheterization, following which I was hospitalized for various tests to try to figure out the cause of the incident,” relates Jennifer. The doctors raised the possibility that the stroke was related to her pregnancy, but a definitive cause “remained a mystery.”

Jennifer lost the pregnancy, but she recovered from her stroke. As the months passed, she and her husband still wanted another child, despite the warnings of her physicians. When she went to see Prof. Cohen for a check-up, she says, “It was the first time I did not hear about the catastrophes that awaited me.” Prof. Cohen explained why the other physicians were concerned, but he said also that “everything might go well.” Having reviewed all the research literature, he was not convinced that there was a definitive connection between her pregnancy and the stroke, and he promised to support Jennifer every step of the way if she decided to go ahead.

When Jennifer conceived, Prof. Cohen took her under his wing, as promised. Throughout her pregnancy, he monitored her very closely and stayed in regular contact with her obstetrician.

Prof. Cohen explains, “We work in an era of defensive medicine. There are many situations in which a woman suffers from various medical problems and, as part of the medical recommendations, she is told not to get pregnant or, if she does conceive, to have an abortion. As far as I’m concerned, giving up on having a child is giving up a dream, and I don’t always agree with that recommendation because it’s a very high price to pay.”

Jennifer notes, “Prof. Cohen made sure to talk to me at my level and let me make an informed decision. . . . He did not ‘cancel’ me and my feelings. Thanks to him, today we have a son and our daughter is privileged to have the brother she always dreamed of.”