Survivor of Jerusalem Stabbing Recounts Attack on Her Family 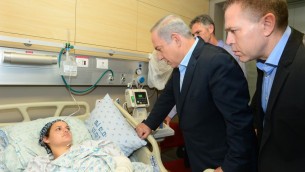 On Monday Oct 5th,  Israeli Prime Minister Benyamin Netanyahu paid a visit to Odel Bennett, whose husband Aharon was stabbed to death in a terror attack in Jerusalem’s Old City on October 3, 2015. Odel and her son are being treated at Hadassah Ein Kerem hospital in Jerusalem. Odel was badly injured in the attack, and the couple’s baby son Natan was lightly injured. Old City resident Nehemia Lavi, who rushed to help the couple during the attack, was also killed.

For the full story, please read this account that appeared in the New York Times.