The Call Every Parent Dreads: the Story of a Car Accident, Hadassah Trauma Expertise, and a Happy Ending 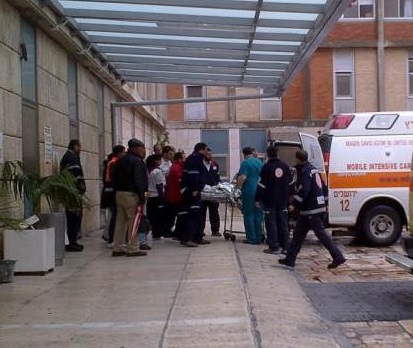 “I knew it was bad when I saw my wife’s knees buckle and her hand grasped the wall for support. Our son Yaakov, 21, was hit by a car,” relates Ephraim Shore, a well-known educator at the Aish HaTorah Yeshiva in Jerusalem.

“It was 10 p.m. when we got the call that every parent dreads,” Mr. Shore elaborates. Yaakov, a combat soldier, had been rollerblading near the Jerusalem Mall while home on leave. Now he was at Hadassah Hospital Ein-Kerem, undergoing emergency brain surgery.

Following two skull surgeries by Hadassah’s neurosurgeons, orthopedists operated on his shattered leg. “It was indeed touch and go at the beginning,” said Prof. Charles Sprung, head of Hadassah’s Intensive Care Unit. Finally, the pressure in Yaakov’s swollen brain went down to levels the doctors felt were safe enough to begin the process of allowing him to wake up.

When he was brought back to consciousness, he was able to recognize his parents.  His long process of recovery began. After three weeks at Hadassah-Ein Kerem, he was moved to the rehabilitation unit at Hadassah Hospital-Mount Scopus. He continues with cognitive and physical therapy three times a week and now he can walk without crutches and his memory has vastly improved.

Ten thousand miles away, in Los Angeles, California, Yaakov’s cousin, Sydney Shore, was celebrating her Bat Mitzvah. In lieu of presents, she asked guests and friends to say “thank you” to Hadassah for helping to save her cousin.

“On May 23rd, 2011, my cousin, Yaakov, was very badly injured while rollerblading in Jerusalem. At first it wasn’t clear whether he would even live, but thanks to the hard work and dedication of the Intensive Care Unit at the Hadassah University Medical Center in Jerusalem, he’s now awake, talking. And although there’s still a long way to go, we’re hopeful he’s on his way to a complete recovery.

“Aside from scaring my entire family, this made me rethink how I wanted to use my Bat Mitzvah money. My parents asked the staff at the hospital what we can do to help them in the future. They need a cooling blanket. This isn’t an ordinary blanket. It’s a very expensive and very needed piece of high-tech equipment that regulates body temperature. For people with head injuries, their body temperature can fluctuate a lot and this affects brain pressure which can be the most serious issue after these accidents, as it was for my cousin.

“In lieu of gifts, please help me help them save more lives by making a tax deductible donation on this site. Thank you so much.  Love, Sydney.”