The Glamorous Hadassah France Gala was a Great Success

Hadassah FranceNews from Our Units9 May, 2019 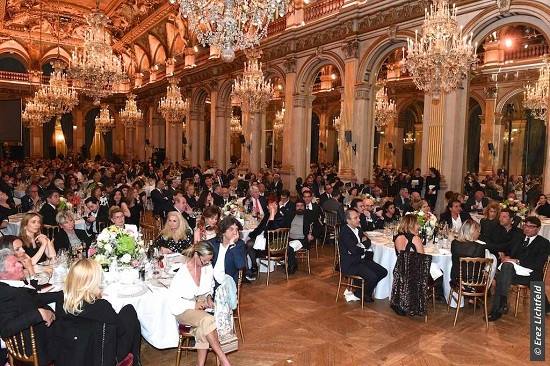 Once again, the Annual Hadassah France Gala held this year on April 29th was a spectacular success. More than 300 participants were dazzled by the beautiful Salons de l’Hôtel de Ville de Paris, an exquisite dinner, outstanding entertainment, and participated generously in raising money for the Hadassah Medical Center.

Following a cocktail party, Ariel Wizman served as the Master of Ceremonies for the evening. The French musician, DJ, journalist and actor welcomed participants to the Gala. He was followed by Hadassah France President Prof. Emmanuel Messas who explained to the audience: “Why should we support Hadassah? Because Hadassah is a bridge for Peace and Medicine. But overall, Hadassah is Israel’s bridge to gather people, from Israel and from all over the world.”

Dr. Sydney Ohana, the Past President and presently President of Honor of Hadassah France, also talked about Hadassah, stating that “Who would have been able to imagine that the State of Israel, born in 1948, would become 71 years later, a leader in terms of democracy, technology and scientific research? Hadassah is clearly a reason why Israel is today one of the leaders in these fields.”

Bernard-Henri Lévy, the famous French intellectual and author mesmerized and delighted the audience with his presentation.

He was followed by a moving musical interlude by violinist Renaud Capuçon, and his accompanying pianist, Guillaume Bellom.

During the sumptuous dinner Charlie Touati took charge of the fundraising for the Hadassah Medical Center. He introduced Prof. Yoram Weiss, Director of the Hadassah Hospital at Ein Kerem, who explained how the money raised during the evening would save lives.

A lively Art Auction (led by Ariel Wizman and Charlie Touati) had participants bidding against one another to raise more money for the Hadassah Hospital.

The Gala was rounded out by another musical interlude, ensuring that the participants would go home with the feeling that they had participated in a beautiful, memorable evening.

As a thank you gift, Lévy, Capuçon and Bellom were all presented with Hadassah Certificates in appreciation of their contribution to the Gala.

The evening also proved to be a great financial success, raising almost 100K Euros to benefit the Hadassah Medical Center.