The Impact of COVID-19 on Women’s Hearts: What Hadassah Has Learned

...More than a HospitalCardiologyCOVID-19Hadassah Hospital11 June, 2020 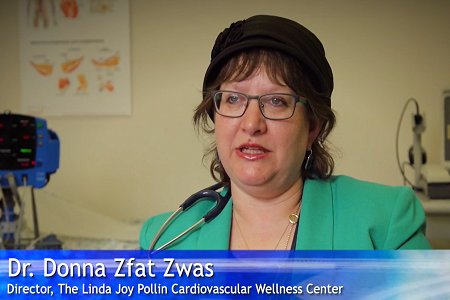 COVID-19 has disproportionally affected women because of an increase in domestic abuse and financial stress, as well as the loneliness and isolation of social distancing, related Dr. Donna Zwas, director of the Hadassah Medical Organization’s Linda Joy Pollin Cardiovascular Wellness Center for Women, during a June 3 webinar on “Women’s Heart Health during COVID-19.”

Unemployment, too, has affected more women than men, Dr. Zwas noted. Single mothers are particularly under stress because they often rely on grandparents for child care, and, with the advent of COVID-19, this has not always been possible. Financial stress, she explained, often leads to more obesity, more smoking, and less exercise. On a physiological level, the stress and anxiety trigger a rise in adrenalin levels, which, in turn, cause inflammation, leading to a rise in the number of white blood cells that bind with molecules of cholesterol and clog cardiac arteries. Ultimately, the scenario can lead to a heart attack.

Statistics also illustrate that social isolation and loneliness, Dr. Zwas reported, have caused a 29 percent increase in heart attacks and a 32 percent increase in strokes. The significant impact of domestic abuse, financial distress, social isolation, and loneliness, she noted, has led her and the staff at the Pollin Center to focus more on these environmental developments as key risk factors. She urged Hadassah women in America to mobilize their communities to help alleviate the loneliness that isolated women are experiencing and to offer resources to those suffering from domestic abuse.

Dr. Zwas also emphasized the need to ensure that women don’t ignore symptoms of a heart attack. “At the peak of COVID-19 in Israel, patients were terrified,” Dr. Zwas said. “Hadassah experienced a 50 percent decrease in patients coming to the emergency room with heart attacks. Those who did come to the hospital often came late.” As a result, Dr. Zwas reported,  there was a 28 percent increase in serious cardiovascular complications. In speaking with colleagues in the United States, Dr. Zwas learned that they all had stories of the same phenomenon. Heart patients experienced more complications because they hesitated to come to the hospital.

Dr. Zwas issued “a call to action to my sisters in America” to spread the message: “If you have heart attack symptoms, even in these crazy times, you need to get help.”