The Miracle of Naor 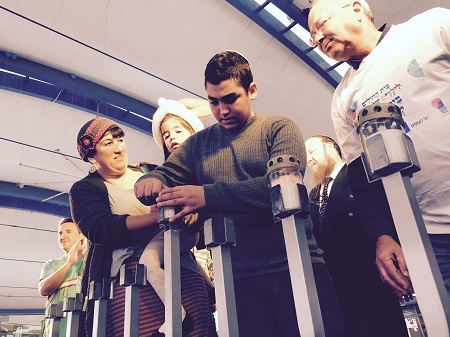 Naor Shalev Ben-Ezra was riding his bike with his little brother on October 12. They were visiting their grandmother, (who still doesn’t know what happened to him) on 16th Street in Pisgat Zeev. The two cousins Ahmed and Hassan Manasra, who live in the adjoining neighborhood of Beit Hanina, left home with the intent of stabbing Israelis. They first attacked a 21 year old, and cut him up badly, and then came upon Naor, and stabbed him, too. One knife pierced the subclavian artery, which brings blood from the aorta to the arm and brain. The medics in the field couldn’t stop the bleeding.

When Naor, almost 13, got to nearby Mount Scopus he was assumed dead by the ambulance team and bystanders. His family received condolences. The public relations team at the hospital got numerous

requests from the press to confirm his death. But at Mount Scopus, the Hadassah team recognized signs of life. “His pulse was 20-30, and we couldn’t take his blood pressure,” said Dr.Yoachim Shiffman, Head of Anesthesiology at Mount Scopus. “

At first we didn’t see the source of bleeding. We turned him over, and blood began spurting from his subclavian artery. I put in my fingers to stop it.” For 15 minutes, the senior anesthesiologist kept his fingers deep in the artery. The team ramped up the blood pressure with medicine and blood products, and packed the knife wound. Shiffman’s friend and medical school classmate Achmed Eid was on his way. He was ready for surgery. Chief operating nurse Ruven Gelfond, who ran Israel’s successful operating rooms in Haiti was in charge. Naor was still alive.

At Hadassah Ein Kerem, vascular surgeon Ina Akopnick was on her way home. A graduate of the Medical Institute of Odessa, Akopnick made Aliyah in 1990, and has worked at Hadassah ever since. “I was already half-way home when the call came for me to come urgently to Mount Scopus. I had to decide whether to go back to Ein Kerem to get my glasses-magnifying surgical loupes-or to go directly to Mount Scopus. I’m a very fast and aggressive driver and was at Mount Scopus in 15 minutes. I had the glasses brought up to meet me there.” She scrubbed up, while Naor underwent imaging . He was still alive. Professor Eid opened the chest cavity. Ina needed to close the truncated artery. “I have done many arterial transplants, but with a child who is in danger of bleeding to death, the pressure is very great.”

She and Prof. Eid finished their work. Naor was still alive. Everything was working. In intensive care, he was gradually awakened by the team.

He’s back in school. In two weeks, he’ll be Bar Mitzvah.

A miracle. A Hanukkah miracle. This Hanukkah the Hadassah Pediatrics Division sponsored a day at Jerusalem’s Cinema City, with movies, medical clowns, and candle lighting. Naor was there to light the candles. After all, his name means “let there be light.” A Hanukkah miracle that belongs to all of Hadassah.