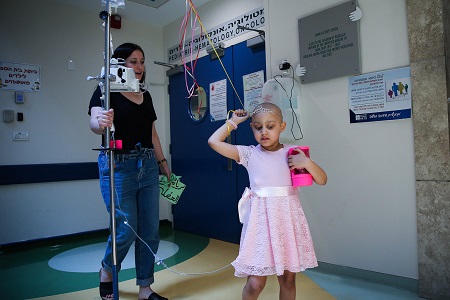 After eight months of hospitalization, five-year-old Osher Tubiyan is going home. She said, “I had a lot of fun studying here, and I got balloons on my last day!”

The medical staff of Hadassah Ein Kerem and the National Service volunteers, who have accompanied this sweet girl throughout her hospitalization, gave her a farewell party. At the end, she received an impressive certificate from the hospital school, which is supervised by the Ministry of Education and where children of all ages study. “I learned English, Arabic, numbers, and letters,“ she says. “I also got lots of balloons on the last day. I had a lot of fun studying here. During the summer vacation, I’ll play with my friends and go on a vacation abroad.”

Said Yoni Tubiyan, Osher’s father, “We arrived at Hadassah after our world turned upside down when we learned that Osher had leukemia. Right away, we were made to feel like family. Osher not only got well, but she also flourished at Hadassah. She was really happy because of all the warmth and love she got here. We received personal, amazing treatment from all the staff. Osher also received a beautiful certificate upon completing her school year here.”

Iris Tubiyan read from her daughter’s certificate: “Our lovely Osher, I want to tell you that you are a special child, brave and very strong. . . . You managed to overcome it all like a real heroine.”

The atmosphere in the school for hospitalized children is pleasant and embracing. Fourteen-year-old Gavriel Harush, who is also sick with leukemia and studied at the unique school, said, “I was given a lot of love and strength here. At first, I did not want to go, but then I realized it is fun and I joined classes. I studied music, art, and sciences.”

Edna Pinchover, the director of the Hadassah School for Children, noted that “about 2,000 students are enrolled in the school each year, with 200 children attending every day.” The teachers and volunteers also go to the beds of children who cannot leave the department. Said Pinchover, “We teach everything, from reading and writing to materials for a full matriculation exam, which also takes place inside the hospital. Besides the regular school certificates, we also offer special certificates attesting for the children’s courage and determination in coping with the treatments that they undergo.”

Translated from the Hebrew by Varda Gal from a story in Israel Hayom: https://www.israelhayom.co.il/article/669763?&tb_cb=1