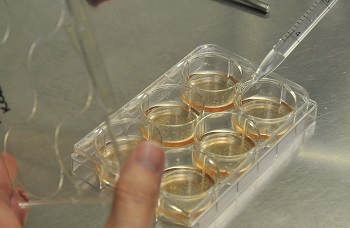 I would like to share with you some exciting news we received during the special celebration that took place this week.

On Tuesday, we held our annual Hadassah Research Day. It was truly an amazing event. HMO’s young investigators – physicians and scientists – fully supported by many of you, presented the fruits of their research in different fields.  Some of the topics they are investigating are: Crohn’s disease; Aortic stenosis, a type of valvular heart disease; ALS, also known as Lou Gehrig’s disease; Diabetes; Pre-eclampsia, a complication of pregnancy; Lung cancer; and Liver Transplantation in children.

It was a celebration for Hadassah and especially for Israel, highlighted by the announcement that Teva Pharmaceuticals, the world’s largest generic medicine  company, a variety of foreign investors had invested over $7 million  in CellCure Neursciences Ltd., a start-up company of Hadasit, HMO’s technology transfer company. This substantial investment will enable CellCure to commence clinical trials on a revolutionary approach to treating – and possibly curing – Age-Related Macular Degeneration (AMD).

Their investment was a vote of confidence in the research that young investigators Benjamin Reubinoff and Eyal Banin announced ten years ago at a Hadassah Research Day like the one that was held this week.

It  took enormous foresight, intuition and knowledge for them to realize over  a decade ago that human embryonic stem cells (hESCs) had the potential to save  tens of millions of people around the world from the devastating darkness.

Age-related Macular  Degeneration is the Western world’s leading cause of vision loss among  people over the age of 50. It is a painless disease that develops when the pigmented cells of  the macula [the center of the retina at the back of the eye] degenerate and die.  This process gradually destroys the sharp central vision needed to see objects clearly and carry out daily tasks such as reading and driving. Thirty percent of  the population over the age of 75 suffer from AMD, which has made eight percent  of them legally blind .

Since  then, with many long hours in the laboratory, sophisticated scientific skill, incredible persistence – and deep-seated belief in their research – these two Hadassah physician-scientists succeeded in developing “proof of concept” that hESCs can be used to successfully treat Age-related Macular  Degeneration. And, Prof. Reubinoff is now Director of Hadassah’s Human Embryonic Stem Cell Research Center at  the Goldyne Savad Institute of Gene Therapy, and Prof. Banin now Director of the  Center for Retinal and Macular Degeneration in Hadassah’s Ophthalmology Department.

A  year ago, their article in the prestigious  journal  Stem Cell  aroused international interest in their unique technology for creating retinal pigment cells from hESCs, cells that ultimately be used to replace the ones damaged by AMD.

The article described how they demonstrated that hESCs can halt the decline and rescue retinal  function in rats that model AMD. The next step is to eliminate the  remaining roadblocks and begin Phase 1 clinical trials within two years – at Hadassah  they hope on about a dozen people suffering from AMD.

Their technique is based on Vitamin B3 and a  protein called Activin A, which promotes stem cll ripening. When the cells were  transplanted into the eyes of rats that suffered from loss of sight due to the  dysfunction of the existing cells, the cells halted structural damage to the retina.

Professors Reubinoff and Banin are focusing on “dry AMD,” the more common variety, for which there is  no cure; the advanced “wet type” causes the proliferation of blood vessels and  can be ameliorated by the injection of anti-VEGF factor.

Teva Pharmaceuticals and the foreign investment boosted their expectations. Now Prof. Reubinoff, who is CellCure’s chief scientific officer, and  Prof. Banin, CellCure’s the Director of Clinical Development, are conducting the translational  research to speed their research results to desperate patients.

“It is a credit to Hadassah  that a big pharmaceutical company decided to invest in our project,” Prof. Reubinoff said .“The  eyes are an excellent target for hESCs,” Prof. Banin noted, “because they are  accessible, we can see where we put them, they remain in the eye and we can  follow their effects. We are very excited,” he concluded.

And we are just as excited as they – and I know you will be as well.