Toddler Given No Chance of Survival Survives at Hadassah 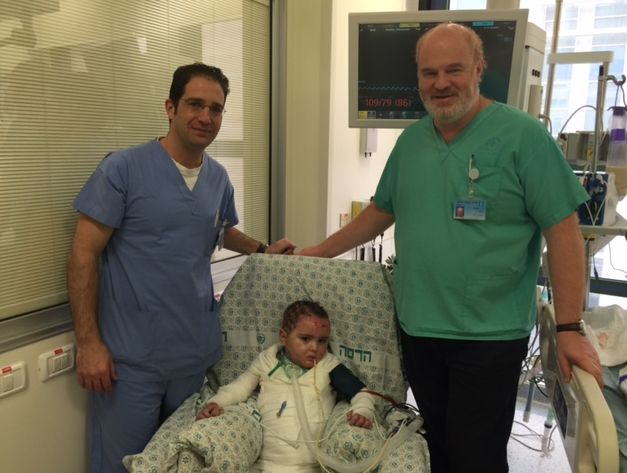 What could be worse than a child being burned by hot water? A child burned by a tub of hot jam, heated to 220 degrees Fahrenheit.

Mohammed Daadua, age three and a half, was playing outside while his father was making a 13-gallon vat of grape jam in the village of Alhader near Bethlehem. When his father went to say his prayers, he surrounded the pot with two chairs and a table.
For the preschooler, the furniture was a challenge, not an obstacle. Mohammed fell into the boiling jam. His clothes were stuck to him. He continued to burn. His breathing became difficult. Mohammed was rushed to the nearby health clinic in Beit Jalla, but the nurse there sent him straight to the hospital in Nablus.

“The doctors told us he had zero chance of survival,” Mohammed’s father, Yaasin, related. “They said we should begin digging his grave.”

The clock was ticking on Mohammed’s life, as his skin continued to burn. It is sometimes said that when there is no hope, there is the Hadassah Medical Center.

“We were desperate,” Mr. Daadua recalls, “but when we saw the Hadassah staff waiting for us, we had our first glimmer of hope.”
“Mohammed arrived with a low heart beat and almost no blood pressure, dehydrated, with hypothermia,” relates Dr. Yonaton Elia of Hadassah’s Plastic Surgery department. Dr. Elia had been involved in Mohammed’s transfer and was among those waiting for him and his family in the Shock Trauma Unit of the Judy and Sidney Swartz Center for Emergency Medicine.

“He arrived with 100 percent second and third degree burns,” reports Dr. Braun. “We have a lot of experience in dealing with burns, but we thankfully have a lot of success. Of course, we have to fight back infection at every stage.”

Mohammed, who has been in Hadassah’s intensive care unit now for several months, has received five skin grafts. The original grafts he was given from the skin bank are only temporary, explains Dr. Braun. As the child’s own skin grows back, grafts are taken from even a small patch of skin to treat badly afflicted areas.

“When his skin heals, Mohammed will have to undergo physical therapy to help with movement,” notes Dr. Braun. “But we are optimistic. We have every reason to believe that he will recover and fully integrate back into life.”