The Transformation of an Iconic Hadassah Building 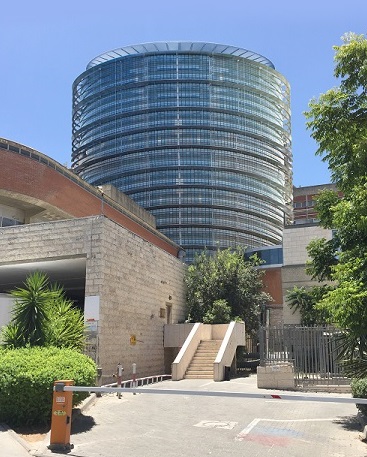 A few years from now, as you round that last bend in the road that winds up to the Hadassah Medical Center at Ein Kerem, you will see before you two towers gleaming in the Jerusalem sunlight. One is the six-year-old Sarah Wetsman Davidson Hospital Tower, among the most advanced surgical complexes in the world. The second—if Hadassah Medical Organization Director-General Dr. Zeev Rotstein and Hadassah, the Women’s Zionist Organization of America, have their way—will be both old and new. That building is Hadassah’s iconic “round” building, which is being renovated, enlarged and reinterpreted to become a setting in which tomorrow’s specialized medical care can be practiced.

“Expansion is vital to the medical center’s long-term survival,” said Dr. Rotstein, who recently completed his second year as director-general. “With occupancy already at 103 percent and Jerusalem’s population set to skyrocket under a multimillion-dollar municipal development project, we must multiply our services and offer them to more people.”

Plans for the Davidson tower and its operating suites were approved in 2005, and then built from the ground up. Hadassah’s round building belongs to a different medical age, its cornerstone laid at Ein Kerem 65 years ago, five years after Hadassah’s hospital on Mount Scopus was cut off and in Jordanian hands after the War of Independence. At the time, its design was considered cutting edge. Its Vienna-educated architect, Joseph Neufeld, bent its corridors around a central core to eliminate the long, impersonal passageways of traditional “shoebox” hospitals, creating its distinctive radial design and inaugurating a major change in hospital architecture.

It was “an exceptionally functional building…a magnificent structure…certainly the finest and largest medical center in this part of the world” and “the biggest building in Israel at this time,” the hospital’s then-Director-General Dr. Kalman Mann wrote in Reflections on a Life in Health Care, published in 1994. “We tried to build it with vision for the future, but some things simply could not be anticipated. Open-heart surgery and dialysis, for example, did not exist when it was planned. Lithotripsy, bone marrow and other organ transplants…were not yet part of medical practice.”

Massive refurbishment is needed to transform this outdated facility into a vibrant hub of future medicine, explained Audrey Shimron, executive director of the Hadassah Offices in Israel. The interior design will reflect today’s changed culture of health and patient care, with the patient its focus in a relaxed and non-institutional setting. The main entrance to each floor will be at the building’s center—the site of today’s elevator shafts—leading to a large, patient-friendly reception area, with service entrances at either side of the structure. Single and double patient rooms, each with en suite bathrooms, will replace the old, overcrowded rooms, with ideally some 200 beds added. Among the departments that may find new, custom-made homes are dermatology, ophthalmology, hematology-oncology, geriatrics and internal medicine.

Under Spector Amisar Architects, the Jerusalem firm that also designed Hadassah’s Davidson tower and its Mother and Child center, “the building will keep its original form,” explained Shimron, “but its floor space will be massively increased by incorporating its balconies and central well. Glass sheeting will give it a contemporary look.”

Infrastructure will be overhauled and replaced. All electrical wiring, plumbing, medical gas lines, elevators and climate control systems will be replaced with eco-friendly modern systems and materials. The foundations will be strengthened to support two additional stories, pending Health Ministry permission. The entire structure will be reinforced against earthquakes and made secure to withstand conventional and nonconventional attacks.

In the “if you will it, it is no dream” culture of the 1950s, Dr. Mann confidently signed off on the plans for the round building—and only then began looking for the money to pay for it. Dr. Rotstein lives in a world where securing the funding is required upfront. Some $29 million will come from the $45 million allocated in 2015 by Israel’s government for upgrading Hadassah’s infrastructure under the medical center’s financial recovery program. HWZOA has embraced the role of trying to raise $91.2 million for the project.

“We’re privileged to be part of the reimagining of the heartbeat of this magnificent medical center,” said Miki Schulman, chair of the Full Circle Campaign: 360 Degrees of Healing, the HWZOA initiative launched early this year. “We welcome the legacy of those who first made this building possible, of those who built and rebuilt our hospital on Mount Scopus and, most recently, those who enabled the Sarah Wetsman Davidson Hospital Tower. We’ve never yet failed to meet our campaign obligations and, with the enthusiasm already shown by supporters, both veteran and new, I believe we’ll meet this one, too.”

Dr. Rotstein intends to have the new medical tower pay for itself as quickly as possible, opening it floor by floor and completing it by 2020.

By then, he anticipates, Hadassah’s patient population will have soared. When the round building welcomed its first patients in 1961, barely 170,000 people lived in Jerusalem. Today, the population is 868,000. The city’s growth has always been Hadassah’s growth, said Dr. Rotstein—and Jerusalem is set to grow more. The $364-million Jerusalem Gateway project, launched by the municipality in October 2016, is expected to create 40,000 jobs in the next few years in 24 new office towers around the Bridge of Strings at the city entrance, along with hotels, leisure and cultural facilities. A light-rail line will link the city center and downtown with Hadassah’s Ein Kerem campus, and the new high-speed intercity train will make the trip just 28 minutes from Tel Aviv.

The round building has always been “a beacon of the best of medicine in Israel, the flagship of its health care,” said Shimron. The city and much of the country watched it take shape, replacing the hospital so bitterly lost for a time on Mount Scopus. It has healed, taught, researched, pioneered and taken in the wounded of Israel’s wars, intifadas and terror attacks, even when under fire itself. The round building has always been about more than architecture, and it will lead the way into Israel’s future.

For more information about the Full Circle Campaign, email International@hadassah.org

Wendy Elliman is a British-born science writer who has lived in Israel for more than four decades.

The photo above is an Architectural rendering of the round building’s new design. Image by Spector Amisar Architects.