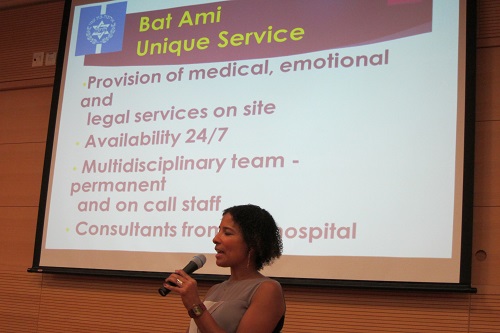 Dr. Mushira Aboo Dia*, a senior Obstetrician/Gynecologist in the delivery room at Hadassah Ein Kerem, treats the victims of sexual abuse and assault at the Hadassah Medical Center’s Bat Ami Center for Victims of Sexual Abuse.

The Bat Ami (Daughter of my People) Center is open 24 hours a day, and has a specialized team of physicians, nurses, social workers and lawyers who can deal with the trauma of abuse in both adults and children.

“The primary goal of the treatment at the Bat Ami Center,” Dr. Aboo Dia explains, “is to return control to the victim.” The person who has been assaulted decides whether to be examined by a gynecologist, to allow the collection of forensic evidence, or to press charges.

Before the Center was established in 2009, victims had to go to the general emergency room, where they were often forced to wait much too long; now they are immediately seen by specialists of the Bat Ami team. Clinical studies have shown that the victim’s recovery is highly influenced by how soon after the assault she is seen by those who can help her.

At the Center, as a precaution, the victim is offered the “morning after” pill, antibiotics to fight sexually transmitted diseases, and medication to ward off HIV/AIDS. Treatment at the Bat Ami Center is free of charge.

Dr. Aboo Dia explains that all incidents of sexual abuse are reported to the police, but it is up to the victim to decide if they want to press charges. In both the Arab and Ultra Orthodox Jewish communities, the shame of a sexual assault reflects on both the victim and her family. If knowledge of the attack leaks out, it may mean that not only will the victim loose the chance to ever marry, but her siblings’ opportunity to marry will diminish. Consequently, many incidents of sexual abuse are kept hidden in both communities.

As an Arab physician, Dr. Aboo Dia was appointed as the administrative director of women’s health for the Palestinian population of East Jerusalem by Leumit Health Services in 2014. She also works in the high-risk pregnancy clinic in the Women’s Health Center of Clalit Health Services in Beit Shemesh, where there is a large Orthodox Jewish population.

On Saturdays, (Shabbat), Dr. Aboo Dia is one of a team of mixed Arab and Jewish physicians who go into the smaller villages in the Palestinian Authority to provide services such as ultrasound and a pharmacy to empower the women to take care of their own health. In Gaza they go in with a mobile clinic to operate, do procedures and train local health professionals, including in the area of mental health.

Dr Aboo Dia explained that there are changes in the Middle East. Medicine is a way to bridge the gaps. So is really listening to the patient.

*Dr. Mushira Aboo Dia, whose family has lived in Ramla for many generations, graduated from the Hebrew University Hadassah Medical School and did her residency in Obstetrics and Gynecology at the Hadassah Ein Kerem hospital. She is a senior physician in the delivery room. She is also the Chair of Physicians for Human Rights in Israel.

She received specialized clinical training in the United States at the Child Abuse Research Education and Service (CARES) Institute of the University of Medicine and Dentistry of New Jersey, and participated in special training programs in Israel to identify, evaluate and treat child abuse and neglect. She recently returned from a year at Harvard after completing a Masters in Public Administration at the Wexner Fellowship in Boston.