Visiting Physician is Awed by Medical Practice at Hadassah Medical Center: A Testimonial 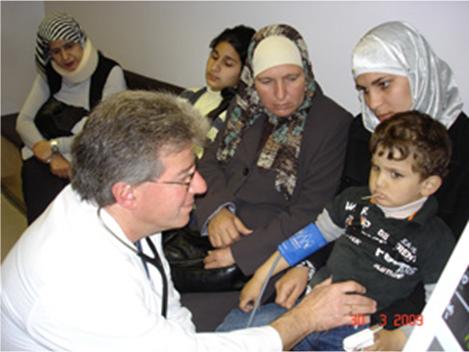 There is Peace in Israel
by Sig Kharasch, MD

Dr. Sig Kharasch was Director of the Pediatric Emergency Department at Boston Medical Center from 1996 until 2008. He is currently attending physician in that department and Chair of the Selection Committee for the Boston Combined Residency Program. He is Associate Professor of Pediatrics at Boston University School of Medicine. He has three children: Manny (13), Eleanor (10) and Gregory (10). He recently returned from Manny’s bar mitzvah celebration in Israel.

We rarely read or hear of good news from the Mideast and Israel. The second Lebanese war, Hezbollah, rockets raining down on Sderot, Operation Cast Lead, Palestinian suffering, Syrian nuclear reactors, Gilad Shalit, Iran. Even an optimist like me could see little hope for this region in turmoil.

Last year I visited a number of different pediatric emergency departments in Tel Aviv and Jerusalem to observe and to see if there were opportunities for me to contribute as a physician. (I have deep roots in Israel. My father moved to Israel in 1974 and was a physician near Tel Aviv for 25 years. I have visited numerous times over the last 30 years.) I was particularly taken however with Professor Eitan Kerem, Chairman of the Department of Pediatrics at Hadassah-Mount Scopus in Jerusalem. Dr. Kerem, a renowned pediatric pulmonologist and Chair of the European Society for Pediatric Pulmonology, guided me through his department, introduced me to some of the staff and made rounds on patients.  He described to me some of the history of Hadassah Hospital, the diversity of patients and disease as well as the underserved population treated there. The hospital “felt” very similar to where I work now at Boston Medical Center, which shares the mission to care for the underserved. I left thinking what an incredible place this would be to work at; by the time I landed home in Boston, my plan was in place.

After numerous emails, Dr. Kerem agreed to have me work as an attending physician in the pediatric emergency department for up to three months the following year, and helped me obtain my temporary medical license from the Israeli Ministry of Health. I started to study Hebrew seriously at an Ulpan in Boston, worked out my leave of absence from work and family (I have an understanding wife!), rented an apartment, and left for my first month last March. I was ready to care for “my people.” It would not take long for me to understand how unprepared I really was.

I landed in Israel on a Monday morning and began work in the emergency department on Wednesday. I put on my freshly pressed white coat with stethoscope and other paraphernalia and walked into the ER, still tired and foggy from jet lag. I blinked a few times as the scene in front of me came into focus. The emergency department was filled with patients and most of them were Arabs!  I was quickly introduced to the nurse manager, Ashroof, a Druze Arab from northern Israel, and Muhammad, a nurse from the West Bank, who was working at Hadassah as an Arab translator. I met the pediatric residents working that morning with me: Amjad, an Israeli Arab from Nazareth, and Ibrahim, a Palestinian from East Jerusalem, who recently finished medical school in Egypt. Having a terrible sense of direction I thought for a moment I was in the wrong place and hospital! There was little time for reflection; within minutes the first ambulance arrived with a four-year-old Arab child whose parents were concerned he had not spoken for the last day and was sleeping excessively. Although breathing, the child was comatose.

Our group quickly descended upon him with IV’s, blood gases, metabolic and toxicology studies, CT scans, and spinal tap, all of which were normal. I told Michael, the unit secretary and an orthodox Jew from a large settlement in the West Bank, to call the neurologists for consultation.  Muhaned, the pediatric neurology fellow, quickly arrived. I would later learn that he was born in—and received his medical degree in—Amman, Jordan, and was financially supported as part of a program to further advance medical care in East Jerusalem and the West Bank. We discussed (in perfect English fortunately!) the further possibilities for the child’s care and Muhaned rapidly arranged an EEG and assisted with transfer to the intensive care unit. By noon that day, Oded, a Jewish Israeli pediatric intern from Jerusalem, and Leah, an American who had completed her pediatric training in Baltimore and was doing a three-month observation period after recently immigrating to Israel with her family, arrived and rounded out our group. We worked very closely together that month.

Hadassah-Mount Scopus is located between predominantly Jewish West Jerusalem and East Jerusalem, a conglomeration of numerous Arab villages. The pediatric emergency department sees 20,000 patients per year. Fifty percent of patients in the emergency department and on the inpatient unit are Palestinian Arabs from East Jerusalem and the West Bank. One need only to look out the window of the hospital to see how closely entwined the populations are in this geographical area. Because of the proximity, the same heath care issues can impact everyone. Infectious diseases, such as the measles epidemic that began in the Jewish neighborhoods of Jerusalem two years ago, would spill into Palestinian suburbs of East Jerusalem. In such a multiethnic and multilingual population, isolationism is impractical and not beneficial to the health care needs of patients and families in this community.

I would come to understand the wisdom of Professor Kerem over the ensuing month. To address this and other challenges, Dr. Kerem has recruited both Arab and Jewish physicians to appropriately reflect the patient population. Many of the Arab residents in training remain at Hadassah as attending physicians or as attending physicians in East Jerusalem. Language barriers have been overcome by using professional medical interpreters and by offering courses in medical Arabic to non-Arabic speaking staff. On the inpatient unit, there are four beds to each room, and both Jewish and Arab families share this space together. As part of the child life program, medical clowns that speak the universal language of humor are appreciated by all families and children. To disseminate clinical information and continuing medical education, Dr. Kerem has developed forums between Israeli and Palestinian pediatricians to improve health care delivery.

During my month I would come to meet and interact with many other physicians and nurses from diverse backgrounds and cultures: Arabs from Syria, Turkey, and the Palestinian territories, and Jews from Israel, Iran, South America, Sweden, Russia, Australia, and Canada. Together, we treated hundreds of patients with diseases including pneumonia, rheumatic fever, meningitis, diabetes, bowel obstructions, and a myriad of rare genetic and metabolic diseases prevalent in the Mideast. Children from the Gaza Strip and West Bank with cystic fibrosis and other chronic diseases, whose health care was sponsored by and supported by non-governmental organizations, were seen regularly in the emergency department, inpatient units, and outpatient centers.

For obvious reasons, politics were never discussed in the hospital. One’s alliance didn’t seem to matter. Jews took care of Arabs and Arabs took care of Jews. No one blinked an eye. It was clear to me that people here were not judged by where they came from, but by their caring and respectful nature and ability to provide medical care of the highest quality for all children and families. Besides, we had more important issues to discuss at our department’s almost-daily lunch together: Ashroff’s impending wedding (I was invited), Leah’s new job, Amjad’s upcoming fellowship in pulmonary medicine and everyone’s concerns about how I was managing alone here. I was invited to numerous dinners after work at medical students’, residents’, and attending physicians’ homes.

One of the most memorable dinners was my visit to Amjad’s home. He and his wonderful wife, Lamis, a social worker in the hospital, live in East Jerusalem—an area I never imagined visiting in my many trips to Israel. The political realities of life here took a back seat to important matters such as who was a better cook, Lamis or her mother; should their 9-month-old son have a pony tail; how much television is too much; and how life might be for them in Canada or the United States for Amjad’s further training.  The dinner and conversation were unforgettable; I did not get home until one AM.

A few days before I left, I asked Dr. Kerem how he would best describe the environment, atmosphere, and department he has created at Hadassah-Mount Scopus. He leaned back, folded his hands behind his head, and smiled, “It is my happy ship.”

I am not sure there will ever be peace in Israel, but what I witnessed each day was a peaceful coexistence between Arab and Jewish families and medical staff. All shared the common belief and goal that the health and well being of children was paramount. If there ever is to be peace, it seems to me that caring for each other and each other’s children is a good place to start.