When a Vehicle Becomes a Weapon: Hadassah Analyzes Car-Ramming Injuries 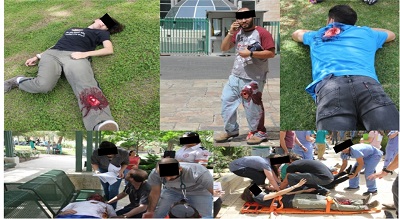 An epidemic of intentional vehicular assaults (IVA) aimed at pedestrians led Hadassah Medical Center trauma specialists to analyze the specific pattern of injuries they cause.

“We hypothesized,” explains Dr. Miklosh Bala, head of Hadassah’s Trauma Unit, “that IVA are associated with a specific injury pattern and severity.” They found that, indeed, “the severity and pattern of injury following IVA is significantly different from non-intentional pedestrian trauma (PT).”  IVA, they found, results in more deaths and severe head traumas than unintentional accidents with pedestrians. In addition, they report that the higher frequency of lower-extremity injuries during IVA, as compared to PT, “further supports our assumption that IVA causes a different pattern of injury.”

The researchers explain that by studying video clips and witness reports, they surmise that “deliberate acceleration of the vehicle into an upright pedestrian may lead to high-energy trauma to the lower extremities and to severe head trauma when the victim is hurled towards the vehicle.”

The data were derived from the 29 IVA that took place in Israel from February 2008 to May 2016, in which there were casualties. Civilians were targeted in 15 of those attacks (52%), and security personnel, including police officers, border police, and soldiers in 14 of the attacks (48 percent). Vehicles used to carry out the attacks included 18 private vehicles (62 percent), 5 heavy mechanical vehicles (17 percent), 4 commercial vehicles (14 percent), and 2 trucks (7 percent). The most frequent IVA took place on major city streets, at road blocks, and at train and bus stations.

Study results revealed that among those hurt by IVA, 77 percent suffered injuries of the lower extremities; 58 percent, head injuries; and 54 percent, facial injuries. In contrast, those who were hurt by PT had fewer injuries of this sort–54 percent, 35 percent, and 28 percent, respectively.

Dr. Bala notes that IVA has recently emerged as the preferred method of attack by unarmed and untrained individuals, often referred to as “lone wolves.” While he reports that, to date, those attacks have occurred mostly in the Middle East and Europe, “we can expect more similar assaults on a worldwide basis, since very little training or preparation is necessary to carry out these IVA.”

The study, entitled, “When A Vehicle Becomes a Weapon: Intentional Vehicular Assaults in Israel,” co-authored by Dr. Bala, Dr. Gidon Almogy, and Dr. Asaf Kedar, is highlighted in The Scandinavian Journal of Trauma, Resuscitation and Emergency Medicine.

“Whether it is natural disasters, transportation accidents or man-made terror attacks,” Dr. Bala emphasizes, “the problem remains the same—that is, you have a number of casualties that overwhelms the local health care system in a very short period of time.”

Sometimes, you end up with a mass casualty incident. Although knowing how to deal with mass casualty incidents (MCI) is of immense importance today more than ever, and its importance is well understood, there are, says Dr. Bala, “still some institutions around the world that are not well prepared.” He explains that while preparedness courses are offered by various institutions such as FEMA (the Federal Emergency Management Agency) and EMS (Emergency Medical Services), as well as medical institutions around the world, many of these courses are not readily available to surgeons internationally. Dr. Bala reports that a survey of surgeons worldwide, conducted by the World Society of Emergency Surgery (WSES), revealed that only 28.3 percent had participated in MCI courses outside their medical facility, while 84.3 percent expressed great interest in participating in one.

To meet this unmet need, WSES and the Israeli Trauma Society (ITS) established an educational platform to share information about MCI preparedness and management. Dr. Bala and Hadassah colleagues, together with members of the ITS’ Committee on Trauma, developed a basic course on management of MCI. WSES included this course in its postgraduate curriculum for surgeons worldwide.

Through its involvement in such an enterprise, WSES is able to offer onsite visits to evaluate the needs and local setup in a particular medical institution, as well as to conduct MCI trainings, together with local authorities.

The course’s objectives are to familiarize participants with the definition of MCI and the basic terminology related to such events, describe common injury patterns, provide essentials for proper medical and logistical management of MCI, and to offer tools for establishing preparedness campaigns. The course answers such questions as: What is the function of the triage officer? What are the principles of triage? What is the proper activation scheme for an MCI? How do you deal with the injured patient’s family? How do you prioritize patients?  How do you handle a multidimensional injury pattern? What are the ethical issues involved? How do you debrief following an MCI to come closer to perfection the next time?

Dr. Bala has written a chapter entitled, ”Education and Preparedness for MCI,” for an upcoming book in which he reviews the educational pathways currently in existence to prepare a health care system to deal with MCI. He elaborates on the importance of staging different types of drills to prepare for MCI and holding debriefings afterward. Dr. Bala emphasizes, “When a medical institution is ready with an MCI system in place, lives are saved.”