Where Others Gave Up: Hadassah Liver Specialists Save a Father’s Life 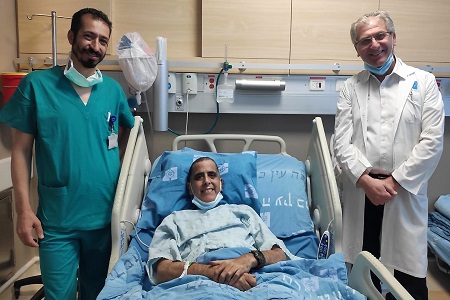 Many doctors predicted that Amir Hazan, a 46-year-old father of two, would live for only two years. First diagnosed in 2011 with cirrhosis of the liver, he experienced a rapid decline in his health about a year ago.

“They gave me a death sentence,” Hazan said. “Numerous doctors told me I needed an urgent liver transplant, but they were really pessimistic. Still, my family wouldn’t give up. They heard about a liver unit at Hadassah Hospital Ein Kerem, headed by an angel named Prof. Rifaat Safadi, and a transplant service headed by Dr. Abed Khalaileh.”

Hadassah’s liver specialists told Hazan he was a candidate for a transplant. “When Amir and his family came to see me,” Prof. Safadi recalls, “we went through all his medical papers. We discussed all the possibilities in-depth, including support for his family after the transplantation surgery.”

Prof. Safadi adds, “Amir had advanced cirrhosis. He was retaining fluid. His liver was unable to neutralize toxins such as ammonia, causing him to become confused and sluggish. He suffered from behavioral changes and tremors.”

After undergoing the transplant, Hazan recovered quickly. His confusion and other symptoms ceased. His family stayed with him around the clock and, together with Hadassah’s medical and nursing staff, offered love and care.

“I can’t adequately express my feelings about the hospital,” says his mother, Marcelle Hazan. “Hadassah saved my son’s life. The professionalism was simply something we hadn’t previously witnessed. If we’d listened to the doctors we visited before we came to Hadassah, our son would not have lived.”