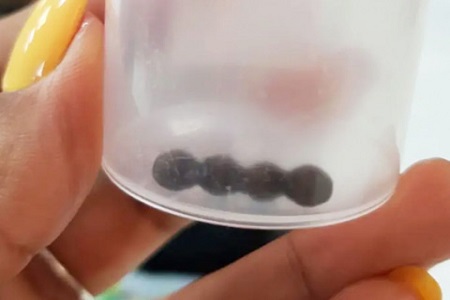 Nine-year-old Alma was jumping on a trampoline when she decided to trick her friends into thinking she had tongue piercings by placing the magnets from one of her games on her tongue. Just as she stuck out her tongue to show her friends, one of the friends jumped, and Alma swallowed all the magnets, which traveled into her stomach.

Alma’s mother, after doing a little research on the internet, realized her daughter was in danger and rushed her to Hadassah Hospital Ein Kerem, where Hadassah’s surgeons saved her from potentially severe complications. As pediatric gastroenterologist Dr. Mordechai Slae explains, these magnets can move out of the stomach “and do enormous damage to the gut.”

In the last two years, Hadassah has treated 10 children who swallowed magnets. Among them was an 18-month-old who swallowed 32 magnetic balls.

“I reiterate to parents at every possible opportunity that it is so important to be careful with these magnetic marbles. This game is not innocent,” he warns.