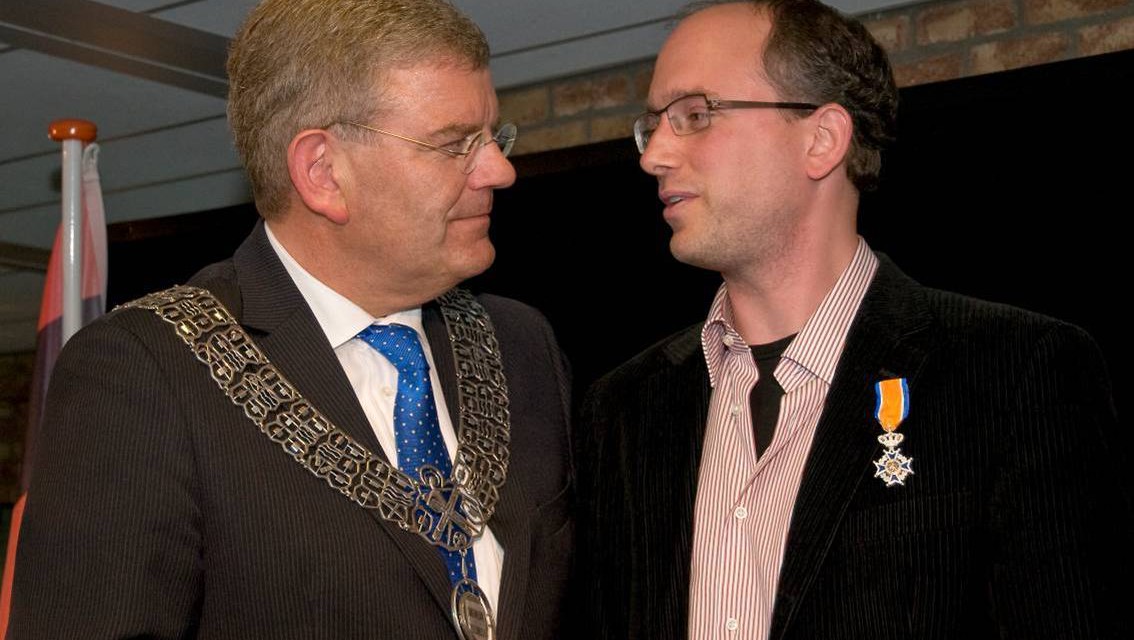 In appreciation for his life-long extensive and influential communal work, Gennie Freen, immediate past Chair of Young Hadassah Holland, was decorated as a member of the Royal Dutch Order of Orange-Nassau by the mayor of the city of Amstelveen on behalf of the Queen of the Netherlands. Gennie, age 35—one of the youngest people to receive this recognition—was nominated by his friends and Young Hadassah colleagues for this prestigious honor, which is awarded to upstanding citizens with long records of humanitarian service.

Founder and Director of Gennie Freen Producties BV, Gennie is a market leader in the Netherlands in the development and selection of discount programs. While running his highly successful company, Gennie has also dedicated tremendous time and energy to his communal activities for the last 14 years, all with a common focus on fostering tolerance among people of different faiths and political affiliations and providing aid and support for the vulnerable and needy.

During the last six years, Gennie has concentrated his efforts in support of the Hadassah Medical Center, which was nominated for the Nobel Peace Prize in 2005 for its work in transcending ethnic and religious differences to provide world-class medical care to all in need. Gennie chaired Holland’s Young Hadassah International unit for two and a half years.  One of his greatest achievements was the pro-bono sold-out performance given by a renowned Moroccan-born performer of the Netherlands, Najib Amhali, at the largest and most prestigious theater in Amsterdam, the Carré. The thousands of dollars raised at this event were earmarked for Pediatric Oncology at the Hadassah Medical Center.

The mayor of Amsterdam and his wife were present, together with Jews, Muslims, and Christians from all over Amsterdam and the surrounding neighborhoods. Mr. Amhali was interviewed about Hadassah on The Netherlands’ national television, with an estimated one million Dutch viewers.

The nomination process for this decoration began months in advance, with long-time friends Aaron Konijn and Edgar Mendelsohn orchestrating the details. All of the plans were carried out secretly, as they planned to surprise Gennie with this honor. Aaron and Edgar contacted all of the organizations Gennie had worked with, including Hadassah, and submitted letters of recommendation from everyone, along with a cover letter summarizing the breadth and depth of Gennie’s commitment to different causes.

When the letter from the government arrived announcing that Gennie had won, Aaron and Edgar went into phase two of their intricate plan to surprise Gennie. They asked the new Young Hadassah Holland secretary, Ruben Teitler, to create a letter on phony stationery from the deputy mayor of Amstelveen with a fabricated request for a meeting with Gennie. The deputy mayor actually agreed to sign this letter, as the government officials are willing to play along with charades involving this honor.

When Gennie arrived at City Hall for his “appointment,” his mother was waiting there for him, much to his confusion. But it was only when all the honorees were escorted to the main auditorium and the mayor of Amstelveen started his presentation that Gennie realized what all of this was really about.

Later that evening, Gennie was surprised once again when more than 50 of his closest friends gathered in a local café to toast him. Aaron and Edgar described the events of the day and read the letter nominating Gennie for this well-deserved award. They played a film that they had taken of Gennie going to “the appointment,” showing his surprise at seeing his mother, and then actually receiving the award.

Your dedication and drive in supporting quality health care for all and promoting understanding among individuals of diverse backgrounds is a role model for all to emulate.

With Admiration and Appreciation,

Tamar also presented Gennie with a Swatch watch to add to his extensive collection, and noted how especially appropriate the gift is, “for all the time Gennie has devoted to supporting the Hadassah Medical Center.”

In adding his congratulations, the new Chair of Young Hadassah Holland, Joost van Raalte, commented that it will be hard to follow such an accomplished person, but he will try to live up to his new role. Joost and his new committee are already working hard on events for the upcoming year, including a World Wide Walk scheduled for June 28th.