A Newborn Baby in Trouble is Rushed to Hadassah From Cyprus 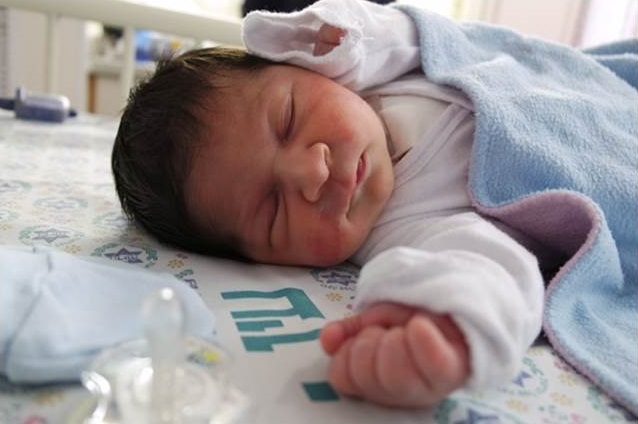 It took a daring team of experts to save the life of Vassilios Taufenos, a newborn from Cyprus. Born with a serious heart defect, Hadassah was called in to help when no one else gave the infant a chance to live.

Cypriot physicians who had looked at Gabriella Taufenos’s ultrasound knew her baby boy had a serious heart defect. A Caesarian section was planned for the birth, but two days before her scheduled date, Gabriella went into labor and baby Vassilios (Greek for basil)  was delivered naturally.

The doctors in Cyprus tried to insert a shunt, but they were unsuccessful. The baby’s blood oxygen-level dropped to dangerous levels. To his parents’ despair, the end looked near. The hospital in Cyprus sought help from centers in Cyprus and abroad, but no one was willing to take a baby with such a low chance of survival.

A month earlier, Dr. Ira Erlichman*, a pediatric intensive care physician, had been in Cyprus to pick up another child with a less serious heart problem to take him to Hadassah Hospital in Jerusalem. The coordinator phoned Dr. Erlichman to see if Hadassah would agree to take one day-old Vassilios.

“I called Prof. Eldad Erez, the pediatric cardiac surgeon,” said Dr. Erlichman. “He said the chances of success were very low, but our Prof.Erez is daring and brilliant, and he agreed to take baby Vassilios.”

Dr. Erlichman and Dr. Yulius Golander, a senior pediatric cardiologist, flew to Cyprus. Said Dr. Erlichman, “Had this child been born at Hadassah, we would have operated immediately after birth. Even then, it would have been a tough surgery. Now we had to prepare him for a journey: travel 40 minutes in a small ambulance, take a 50 minute flight to Israel, and another 50 minutes in the ambulance to Hadassah. We were anxious the whole time.”

Prof. Erez texted me to say he hadn’t found any cases in the literature where such a child could survive – but still we would try. When we got to Ein Kerem, the baby was rushed to the operating room. Prof. Erez was waiting.”

The condition is called transposition of the great arteries with intact ventricular septum, which means that the two main arteries leaving the heart are reversed and the way blood circulates through the body is changed, leaving a shortage of oxygen in blood flowing from the heart to the rest of the body. Sometimes a hole between the ventricles gives some relief, but Vassliios was born with the space between the ventricles intact, which made his chances worse.

Despite the low chances that Vassliios would make day 3 of his life, on day 10 he was so much better that he and his parents Andreas and Gabriella flew back to Cyprus with their rosy-cheeked son. “Thank you very much Israel,” said the happy Dad. “Thank you, Hadassah.”

*When the phone call from Cyprus came, Dr. Erlichman was on a month’s military reserve duty where he is the battalion doctor in the infantry unit dealing with the current wave of violence. He can’t always answer his phone when on duty, but – by good fortune — the call came on a rare day-off.