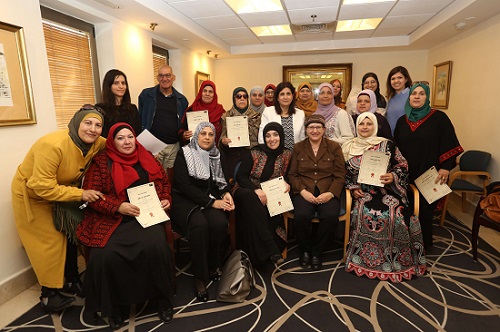 Taking responsibility to create an environment for healthy living in their communities, 43 women from the Arab Sector of Jerusalem celebrated the completion of the Healthy Lifestyle Leadership Course of the Hadassah Medical Organization’s Linda Joy Pollin Cardiovascular Wellness Center for Women.

Fifteen of the graduates participated in the East Jerusalem course, and 28 took part in the one conducted in conjunction with the community center in Beit Safafa. To date, four Arab sector cohorts have graduated.

Dr. Donna Zfat-Zwas, director of the Pollin Center, and Dr. Maha Nubani Husseini, Pollin Center director of programming in the Arab Sector, presented diplomas to the graduates from East Jerusalem. The women had been selected for their leadership abilities from among participants in a Pollin Center program aimed at preventing diabetes, a disease that afflicts half of Jerusalem’s Arab women.

At the celebratory event, the graduates shared initiatives they created as part of the course. The programs ranged from preventing accidents to promoting walking groups to nurturing self-esteem. The speakers noted that among the discoveries they made was that the older and disabled members of their community needed special attention in preventing accidents, often because of inadequate electricity precautions in their older buildings.

The graduates also spoke of overcoming familiar obstacles to reaching their goals for their communities. Creating walking groups, for instance, where they incorporated nature and historical tours encouraged many women to begin walking routines. The graduates hope to enlist many more women in taking responsibility for better health.

“We need to create a generation of mothers who can reduce accidents in the home,” said Nisreen Shehada, one of the graduates. The Prophet Mohammed says we’re responsible for our own homes and for our own children.”

“No one from the outside can be as effective as you are in changing your communities,” Dr. Zfat-Zwas told the graduates. “Change begins, as you have told me, with changing yourself first. You have to bring your personal vision and passion to your work, and that’s what you’re doing.”

Presenting diplomas to the Beit Safafa graduates together with Khawla Othman, coordinator for women’s programs, and Ali Ayoub, head of the Beit Safafa Community Center, Dr. Zfat-Zwas noted, “As a doctor, I treat people only after they become sick. Your power is much greater; you can prevent illnesses. Working as a group, you create an environment of healthy living for your entire community.”

During the graduation, participants shared anecdotes about the personal impact the course had in getting their husbands to stop smoking, in reducing cholesterol levels after decades of problems, and in leading to drastic changes in their cooking.

Prof. Chaim Lotan, director of Hadassah’s Heart Institute, also addressed the women and said, “We say the heart has no borders. This program not only improves health but also creates bridges between Jews and Arabs.”