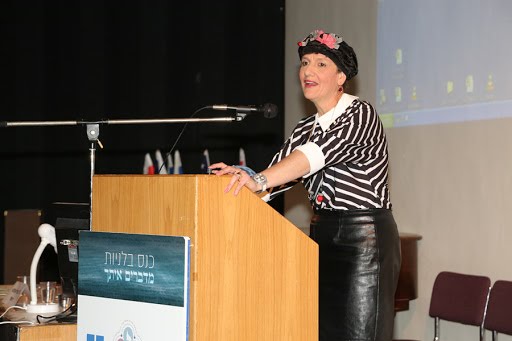 This time Member of Knesset (MK) and former nurse Shuli Mualem (photo) got personal: “I don’t often get the opportunity to speak about my time defeating breast cancer, but I feel privileged to share my experience here, among women active in their communities, at this conference that joins the medical and the ritual.”

MK Mualem was speaking at a conference at Hadassah Hospital Mount Scopus for attendants working at the ritual bath (mikveh). In an emotional conversation, she told the audience how her cancer treatment brought on early menopause and resulted in her last visit to the mikveh. Dr. Albert Greenspoon, an oncologist at Hadassah, added information about the medical aspects of MK Mualem’s story and identified occasions where a mikveh attendant would be privy to a suspicious growth and should act quickly to refer the woman to a physician. Three hundred women from throughout the country gathered at Hadassah Mt. Scopus to learn how their role as mikveh attendants can be utilized to improve the health of other women.

“Part of Hadassah’s mission,” said Dr. Tamar Elram, Director of Hadassah Mt. Scopus, “is the advancement of women’s health, and we realize the importance of local activists in this role, in addition to physicians. We are all part of the same continuum dedicated to advancing women’s health.”

“As emissaries for women’s health, your reach is felt in every part of the country,” said Dr. Dvora Bauman, a senior gynecologist at Hadassah and director of Hadassah’s Bat Ami Center for Victims of Sexual Abuse.

The attendants learned about medical conditions that become apparent at the ritual bath. “The mikveh is an opportunity to identify issues that a woman may think are mundane but which might be symptoms of severe medical issues or causes for infertility,” said Dr. Yuval Bdolach, a senior obstetrician-gynecologist at Hadassah. “If she complains of painful periods or if she is having a hard time getting pregnant, there may be a medical reason.” Dr. Bdolach taught the mikveh attendants how to identify situations where medical intervention is crucial.

“I am going back to my community and my work as an attendant with tools to help Jewish women,” noted Hadas, an attendant from the north of Israel. “The medical experts at the conference made me feel empowered to ensure the health of the women who frequent the mikveh. Thank you for this opportunity to gain from your medical expertise.”