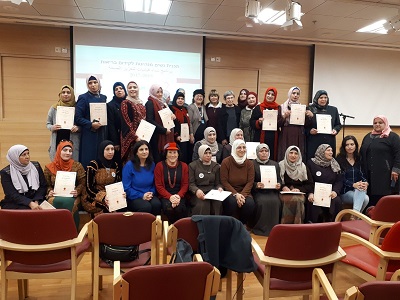 The graduates attended two intensive pilot courses. The first was a 22-week curriculum on the prevention of diabetes, a disease that so many of the women in Jerusalem’s Arab population have developed–a disease that puts them at major risk for heart disease. The second was a leadership course, during which they were trained to create and implement health projects in their community.

“What we learned in conducting these courses,” relates Pollin Center Director Dr. Donna Zfat-Zwas, “is that these women know what they need to do to be healthy, but they don’t know how to translate this knowledge into their own daily reality.”  And that is why, she explains, “empowerment must be the first factor in getting women to take care of themselves.”

Parallel courses took place in two community centers. From the tens of women who attended, 25 were chosen for potential leadership roles, particularly because of their ability to create and carry through community health initiatives. This involved designing, finding funding for, and implementing their projects.

The 25 new leaders, all of whom are homemakers, presented their health projects before the graduates and Hadassah Hospital staff at the graduation event.

Among their health initiatives:

*  A school-wide health project in three boys’ schools in the Old City and in the neighborhoods of Shuafat and Sur Baher. Implementing this project required approaching the principals for buy-in, overcoming suspicion of something new by the communities, and convincing the local kiosk owners to provide healthier substitutes for the junk food they were selling near the school. Different classes competed with each other to choose healthier alternatives–drinking water, instead of sweetened drinks; eating a healthy breakfast at home; and including fruit and vegetables in their school snack.

*  A project to get women to walk on a regular basis. The women had to overcome their husbands’ objection to their going out alone, and they had to find a safe environment for their walks. They published a brochure about the impact of walking in reducing diabetes and heart disease, and created interesting walking paths within their neighborhood, as well in a local community center’s playing field. Twenty women still meet regularly for walking, thanks to this new initiative.

*  A project to create an “Over a Cup of Coffee” health club, where healthful recipes are shared and health issues are presented in different women’s homes. Women whose husbands object to them leaving their own homes for such meetings are nonetheless included in the WhatsApp groups, where the discussion focuses on women’s health issues.

“The best part is that many women are connecting with their inner strength,” comments Dr. Maha Nubani Husseini, Director of the Pollin Center’s work in the Arab sector. “Several women have gone back to school and completed their matriculation exams.”

Dr. Zfat-Zwas adds: “We are so impressed with the creativity and resourcefulness of these leaders. At our first meetings they were too shy to stand up and speak. Now, with new tools in community organization, they addressed the assembly with confidence and pride. They are already having such a positive impact on their communities and themselves.”