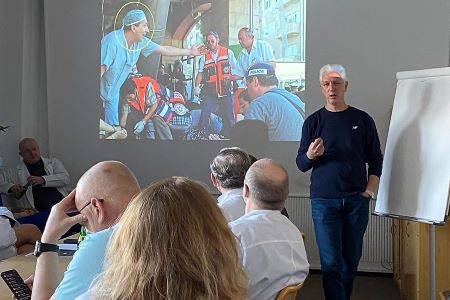 What would happen if a missile hit a town in Ukraine and 40 injured individuals were brought into the hospital’s emergency room at exactly the same time?

“This hospital is responsible for responding to regional mass casualty disasters,” relates Dr. Bala. “Fortunately, they haven’t had any such events, but with the war taking place right across their border in Ukraine, we were asked to share our much-practiced system of treating patients during mass casualty incidents. In Israel, we live in a constant state of alertness, and we’ve developed efficient systems to deal with the unexpected.”

Dr. Bala came to Hadassah Ein Kerem in 2000, at the beginning of the Second Intifada, during which the hospital treated half the terror victims in the country. He trained under renowned trauma surgeon Prof. Avi Rivkind, whose initiative resulted in the decision by Hadassah, The Women’s Zionist Organization of America, to fund the first shock trauma center in Israel.

“Medical centers that face war-related injuries and a surge of patients that challenge their capacity require systems that have prepared them for the unexpected,” says Dr. Bala, who has trained hospital emergency staff from North and South America, Russia, Sri Lanka, Bulgaria, Italy, and many other countries. “Unfortunately,” he adds, “many places wait until they experience terror or a natural disaster to develop these services.”

Dr. Bala explains, “Step one is gathering information from the field. We are fortunate to have the excellent ambulance services of Magen David Adom, whose medics can initiate treatment and inform us as to what type of patients are being brought in.” He notes that “there has to be space for the large influx of patients, which may require moving other patients out of the emergency room. It’s easy to be fooled by the patient’s behavior as to who most requires immediate attention. The most experienced doctor, not a resident, needs to be making the calls in triage. There has to be a defined chain of command with one person making the final calls.”

Dr. Bala, who was born in Belorussia, speaks fluent Russian, but he and Dr. Benbenishty lectured in English because the younger staff in Poland no longer learn Russian in school, as did their older colleagues who were educated while Poland was a satellite state in the Soviet sphere of interest.

“When you are used to a daily routine, you have to move quickly to use your staff and facilities in a different way,” says Dr. Bala. He notes that the Lublin hospital’s medical team and facilities are excellent, but “what they are lacking—and they are lucky with this—is the experience of mass casualty trauma. With the war happening nearby and the uncertainty of where missiles will fall, they are seeking greater preparedness. We are proud to share what we have learned.”