Hadassah Cardiologist’s Initiative Will Likely Save Hundreds of Lives 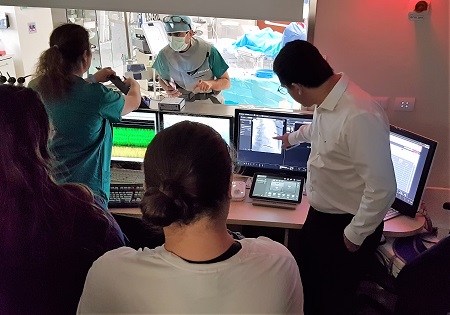 When a patient from one of Jerusalem’s Arab neighborhoods visited Dr. Yitschak Biton, little did the Hadassah Hospital Ein Kerem cardiologist/electrophysiologist know this would be the start of a journey that will likely save hundreds of lives.

The patient was suffering from atrial fibrillation, a type of arrhythmia or irregular heartbeat, which could lead to blood clots, stroke, heart failure, and other heart-related complications.

“The man was not being treated according to today’s guidelines,” says Dr. Biton. “He was getting the type of treatment we were giving 20 or 30 years ago.”

The patient’s doctor had been giving him anticoagulants, painfully injected through the stomach. There are many newer ways to treat atrial fibrillation.

“It occurred to me that the problem was probably far wider than this one patient,” says Dr. Biton, a Hadassah graduate who further honed his skills at Massachusetts General Hospital in Boston.

Dr. Biton called the patient’s physician and learned that there is an acute shortage of cardiologists in eastern Jerusalem, with only two cardiologists for hundreds of thousands of people. Much of the diagnosis and treatment of heart conditions is carried out by family doctors.

“The doctors there are great, but treatment requires specialized knowledge,” explains Dr. Biton. And, he adds, the problem is compounded by unhealthy lifestyles, including heavy smoking.

Dr. Biton decided to act. He contacted pharmaceutical and medical device companies and asked them to sponsor a conference for family doctors about arrhythmias. Doctors from Hadassah’s Irma and Paul Milstein Heart Center volunteered their time to give presentations to some 150 community doctors about innovations in the care of arrhythmias.

Dr. Biton plans to turn this meeting into an annual event and has already planned a follow-up conference for April. However, for him, the real achievement is the creation of a WhatsApp group for all the doctors.

“Whenever doctors have questions, they can chat with 150 of their colleagues as well as Hadassah staff, who can share their experiences. In this way, the doctors get the right answer to their questions, and others learn during the process.”

Dr. Biton is organizing a separate event for doctors in Jerusalem’s Jewish neighborhoods. He created separate tracks because of language barriers.

The outreach is part of a wider initiative by Hadassah cardiologists, at the direction of the new head of cardiology, Prof. Ofer Amir, to share more of their skills in the Arab and Jewish communities, before patients are referred to the hospital. At the same time, Dr. Donna Zfat-Zwas, who heads the Linda Joy Pollin Cardiovascular Wellness Center for Women, is initiating many heart-health awareness programs across Jerusalem, empowering local community leaders to spearhead healthy lifestyle changes.