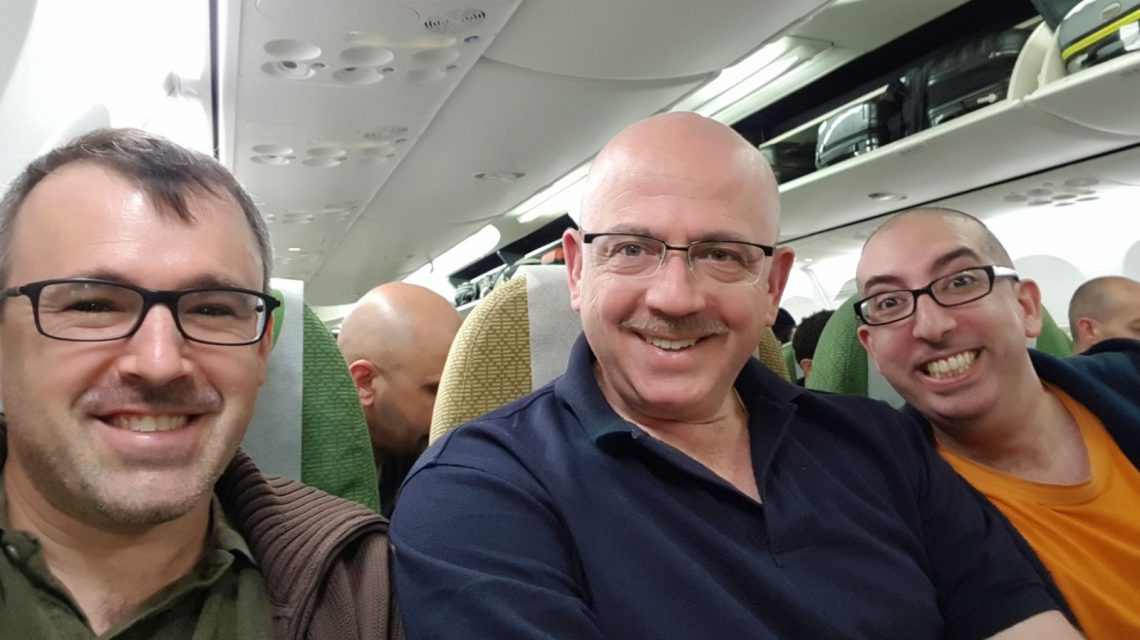 For the first time in history, scoliosis back surgery was successfully completed in Ethiopia, thanks to the Hadassah Medical Center surgical team that flew in from Jerusalem.

Mebrat’s mom and dad don’t yet know that their daughter’s back surgery, performed by Hadassah Medical Center surgeons, was a success. They live in a farming town with no phone or electricity, far from the hospital in Mekelle. To convey the news, her brother-in-law, Girmay will phone someone who lives closer and he will make his way by taxi or donkey to their house. Mebrat has been living with Girmay and her oldest sister, Gidana, in Mekelle for two years, ever since her back started to hurt so much. The schools are better in Mekelle and Mebrat, whose name means light, likes to study. She’s 16 and a tenth grader. But in the last half a year, the curvature in her back went from a 45 to a 70-degree angle, with fears that she would be 90 degrees bent over.

Mebrat hid the deformity in loose clothes. She didn’t have a boyfriend and she knew it was unlikely she would get married. Soon she would be at risk for life-threatening bouts of pneumonia because her back curvature would interfere with the functioning of her lungs.

Not a surgeon in Ethiopia could fix it. In the past, children have been sent abroad to be operated on, but the Hadassah team knows how much better it is to enable a child to be treated in his or her supportive home environment.

The good news for Mebrat was the arrival of the Hadassah spine surgery team in Mekelle. In four hours of surgery, using the equipment they had brought from Israel, layer by layer, they exposed the twisted spinal cord. Screw by screw, they chose the angle of repositioning the vertebrae. Working in tandem on two sides of the teenager, spine surgeons Prof. Leon Kaplan and Dr. Josh Schroeder – long-experienced at doing surgery together – p The anesthesiologists overcame challenges of an underperforming lung and an unsteady oxygen supply. At last, Nurse Ammar Farhat handed Dr. Schroeder a titanium rod. Dr. Schroeder cut it to fit Mebrat’s size, and grimaced as he bent the metal so that the rod would cause her spine to rotate and straighten. Then the two surgeons worked quickly to attach hanging clips to hold the rod in place.

“The last screw is in,” said Dr. Schroeder. A beat of silence and relief went through the operating room. All that was left was to close up Mebrat’s back. Spine Fellow Dr. Hananel Shear-Yashuv did the sewing. While he worked, Hadassah Nurse Tsheay (Orna) Tadoses-Solomon, Deputy Head Nurse in charge of recovery at Hadassah Hospital Mount Scopus, coached the staff in the recovery room to ready a bed, sterilizing the area. A specialist in minimizing pain, Nurse Tsheay Tadoses-Solomon, who was born in Ethiopia, noted: “My life’s dream was to be a Hadassah nurse. I am so proud to be able to come back to Ethiopia for the first time in 27 years as a nurse and to be part of the team that helped this girl to have a better quality of life.”

Mebrat will begin physical therapy tomorrow and will be up walking soon. She’ll be straight and she’ll be at least two inches taller. All she can talk about is the surgeons whom G-d sent her way.

Hadassah’s surgical team had originally planned to do only Mebrat’s surgery on their first day of operating in Mekelle, but another emergency case came up. He was a 21-year-old man who, not wearing a seat belt, flew out of a car, severing his back. The surgeons fused it back together.

The Hadassah Medical Center surgeons urged caution about celebrating this surgery until it was over. They were performing an extremely complicated spine repair on a 17-year-old who had a 110-degree back deformity. His twisted back was full of hills and valleys. The surgery would take many hours under anesthesia.

And so they began, slowly and carefully exposing layers of his back. Reminiscent of the Great Syria-African Rift, his back was lined on both sides by surgical screws with what looked like a pulsing river—his spinal cord–running through. The placement of the screws was just the beginning. Four metal rods needed to be cut and shaped to support his back. His rib cage, long distorted by his curvature, needed to be re-shaped. This process required literally hundreds of pieces of equipment, handed to the surgeons by Nurse Ammar Farhat. Surgeons Dr. Leon Kaplan and Dr. Josh Schroeder were again on two sides of the youngster, working in long-practiced ta

ndem. “We don’t have to speak much,” said Prof. Kaplan. “We understand what the other is doing.”

A third set of surgical hands belonged to Dr. Hananel Shear-Yashuv, who is doing his Spine Fellowship at Hadassah. At each step, Anesthesiologists Dr. Yuval Meroz and Dr. Galel Yacobi gave the nod forward, helped by Operation Manager Nurse Reuven Gelfond, who hurried to roll in a new tank of oxygen when one unexpectedly ran out. Sitting near the operating table was Sagi Gudes, monitoring the patient’s neurological capacity. Key muscles and the brain were attached to a computer monitor to make sure no muscle function had been compromised. At many intervals, he shouted “Hakol b’seder”  (All is okay)! and the surgeons went on to the next step.

It was a symphony of hammers and drills with the scent of cauterization frequently filling the air. The room was hot. The surgeons, working without air conditioning, frequently needed their foreheads wiped and water tubes pushed under their masks. But they never took a break. With the back reshaped, they needed to deal

And who is he? This is Fano, a countryside boy, the youngest of eight children, who can now face the future with hope.

For the Ethiopian staff who took part in and observed this surgery, the bar was raised high to show the level of surgery that could be accomplished right in their own operating rooms. For the Hadassah team, it was an achievement to demonstrate that the high level of surgery they are famous for can be exported to the neediest of patients.

Post-surgery, Fano was moving all his limbs. He will be sore for a while, but he will walk straight.

Watch the video documenting the journey.